On a wing and a prayer 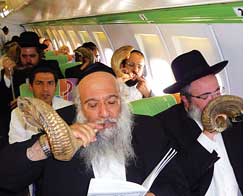 On August 10, 50 Israeli rabbis and Jewish mystics offered prayers and sounded the ram's horn to ward off the swine flu. Nothing unusual. Diseases usually bring out the best in holy men. But this time they took to the skies. The Jewish daily Yediot Ahronot said a plane with 50 holy men circled Israel.

"The purpose of the flight was to stop the (swine-flu) epidemic so that people will not keep dying from it," Rabbi Yitzhak Basri, one of the participants, told the newspaper. At the time, this magazine went to press, Israel's health ministry had confirmed more than 2,000 cases of swine flu, with five fatalities.