On love and life 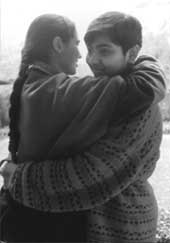 alone and uncared for? Reach out to others, or you may grow up to be disturbed and dangerous individuals, who are likely to die at a young age. This is the outcome of a recent conference organised at Georgetown University by the New York Academy of Sciences. Called 'The Integrative Neurobiology of Affiliation', the conference was held to discuss the importance of being social.

The scientists discussed the biological processes underlying comity, friendship and peacemaking gestures. Rituals of reconciliation and solace that chimpanzees and other non-human primates indulge in after a fight were also highlighted. The finding: dependence on others is not important for humans alone, but for every social creature.

Exploring the neural and hormonal circuitry involved in various affiliative gestures, Kerstin Uvnas-Moberg of the Department of Physiology and Pharmacology at the Karolinska Institute in Stockholm, highlighted the biochemical mechanisms in opposing emotional situations by comparing a snarling battle-ready man with a lactating mother. In the fierce fighter, the levels of fight-or-flight hormones like cortisol and epinephrine shoot up. His heart beat accelerates, blood pressure and blood sugar soars and any gastrointestinal activity that could divert energy from his muscles cease. In short, he enters a state of physiological catabolism -- a mobilisation and breaking down of the body's energy stores.

In the case of a lactating mother, anabolism replaces catabolism, thus building up energy reserves rather than breaking them down. In a woman who is nurturing her baby, insulin levels mount in order to pull sugar from the blood and store it in cells. Concentration of enzymes like gastric acid and hormones like gastrin and cholecytokinin also increases to aid efficient digestion of food in the mother and the transfer of energy from food to the body and to breast milk.

Seymour Levine of the Stanford University Medical School, us, after a study on monkeys, suggests that loss of a stable social relationship causes an increase in the level of stress hormones. On separation from their mothers, infant squirrel monkeys showed a profound increase in the levels of cortisol. And what is true for monkeys holds good for humans also, said scientists.