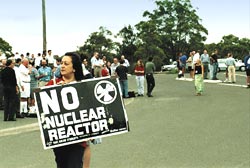 Despite the fact that Sydney lies in a seismic zone, Australia's nuclear watchdog has given the clearance for a new reactor at a suburb near the city. The construction of the us $171-million replacement research reactor had been put on hold after excavation work at the site uncovered a geological fault line.

Apart from its susceptibility to earthquakes, another cause for concern is the radioactive waste the reactor would generate and its safe disposal. Environmentalists point out that these issues have not been addressed in the contract between the Australian Radiation Protection and Nuclear Safety Agency (arpansa) and Argentine state firm invap se, which has been given the task of building the reactor. The anti-nuclear group feels a new reactor would result in deadly radioactive waste being transported from Sydney through rural areas before being dumped on aboriginal land in South Australia. Justifying the watchdog's move, science minister Peter McGauran said the site had been given the go-ahead after a three-month inquiry by Australian scientists and an international expert in seismic analysis nominated by the International Atomic Energy Agency. He added that the study determined that the last movement of the fault was five million years ago. Fault lines are located all over the Sydney basin.

The project is being dubbed as the largest single investment in the history of Australian science. According to critics, the structure will gobble up half of the country's science budget for years to come.