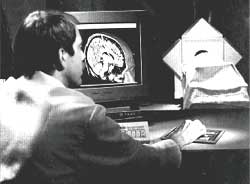 scientists from the Washington University School of Medicine and Stereotaxis, a firm in St Louis, us, are currently testing a modified version of the neurosurgical procedure called stereotaxis, named after the company. Stereotaxis is a technique that enables surgeons to treat damaged and diseased parts of the brain that are located deep within. The improved version, called the magnetic stereotaxis system, aims at reaching the disabled areas by damaging the healthy tissues of the brain to the least extent possible. For instance, a patient being treated for Parkinson's disease would have only one path of neurons damaged as opposed to six with the conventional method ( Scientific American , Vol 275, No 2).

Magnetic stereotaxis involves the insertion of a magnetic pallet -- the size of a grain of rice -- in a small hole drilled into the skull of the patient, while his/her head is placed in a chamber housing six superconducting magnets. The surgeon then uses a magnetic resonance image and steers an implant linked to the pallet into the brain. The implant could be a catheter, electrode or any other device to minister the trouble spot. The technique allows surgeons to not only dodge certain critical areas but to even move the pallet around.

Even though the possibility of exploiting magnetic power to guide implants into the brain caught scientists' imagination much earlier, the technique was faced with a handicap. The accurate control of magnetic fields posed a challenge. However, a decade ago, Matthew A Howard III, then a physics student at the University of Virginia, realised that the instruments used by physicists to measure gravity could help control magnetic fields. "That discovery, coupled with improved computers and brain imaging devices, enabled investigators to fashion the magnetic stereotaxis system," explains Howard, who is now a neurosurgeon assisting the researchers in St Louis from his base at the University of Iowa. Although the scientists acknowledge that the hardware for magnetic stereotaxis will probably cost more, they claim that it will save money by reducing operating time. It is also believed that the scope of the technology could be broadened to include its use in other parts of the body such as the liver or blood vessels.

Stereotaxis, on the other hand, requires surgeons to plunge needles or electrodes straight through the brain to treat a trouble spot within. During the process they end up tearing healthy and essential neural tissue, a risk that could compound if several needles or electrodes need to be inserted. For instance, the treatment of Parkinson's disease through stereotaxis involves the insertion of six drug-delivering needles in the different spots that contain the defective tissue. Surgeons using this conventional method try and minimise surgical damage by reviewing a brain scan image first and avoiding the most crucial areas. But it does damage a great deal of brain tissue.

As of now, the new technique has been tried out on the brains of dead mammals, the brain of a live pig as well as on a block of gelatin, which has about the same consistency as the human brain. While Stereotaxis, the only company holding the patent for the technique is committed to magnetic neurosurgery, other neurosurgeons are waiting for concrete evidence from human trials. Meanwhile scientists at Washington University plan to apply to the us Food and Drug Administration for approval to begin testing the method on humans. It is reported that the first clinical trails could begin by next year.