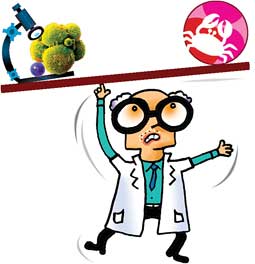 What would you choose? Stem cells or cancer?

what if the beauty experts were to devise a skin cream that cures all pimples with a single dab? Women try it and are happy at first. One dab and the pimples go but so does the glow of the skin, they realize gradually. What do they do now? Let the rashes be or make do without a glowing skin?

This is the kind of dilemma stem cell scientists face. They have to choose between stem cell research and cancer. The skin cream is their p53 gene. Under normal circumstances, this gene keeps cancerous cells at bay. But disabling this gene improves the production of stem cells--which have the ability to divide and replace almost any cell lost to tumours, cancers and disorders like Parkinson's and spinal cord injuries among others.

The gene works when cells enter an abnormal phase of growth.Due to this the damage the cells endure initiates a process that prevents further damage. The defective dna induces the p53 gene to code for a protein called p21. This protein programmes the death or premature ageing of abnormal cells to stop them from multiplying. In cases where the gene is absent, the abnormal cells have proliferated vigorously leading to the tumours. The p53 gene turns into a bone of contention when it behaves in a similar manner with stem cells.

Cutting off the activity of p53 allowed scientists to use only two genes to generate the iPS cells. Cells with their gene intact were prone to die in lab cultures. So, disabling the gene helped generate iPS cells efficiently. But without any checkpoint in place, these cells also started dividing abnormally and led to tumours. Hyenjong Hong from the Kyoto University found out that when iPS cells were used to generate mice, they developed only partly and went on to develop malignant tumours.

Stem cells are a valuable resort to cure cancers. It is ironical to see them turn cancerous themselves. Scott Lowe from the Cold Spring Harbor Laboratory and Howard Hughes Medical Institute said a lot more effort has to go in to generate stem cells efficiently and ensure they are kept in check during their growth and division. The paper was published online in Nature on August 12.