South Korea expresses its intent to reduce greenhouse gases "voluntarily", becomes the developed nations' showpiece to be presented at the COP-4 in Argentina 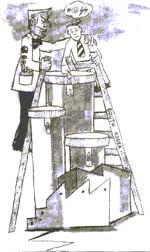 HERE'S some news for developing nations to ponder over till the next climate change conference in Argentina in November. South Korea has "volunteered" to reduce greenhouse gas (GHG) emissions from the year 2018 and has voiced its desire to do so to its strong neighbour Japan. With this South Korea earns the distinction of being the first developing economy as designated under the Kyoto Protocol (otherwise South Korea is a member of the Organisation of Economic Co-operation and Development) to express its intent to reduce GHG emissions.

Under the protocol adopted at the United Nations Climate Change Conference in Kyoto in December 1997, developed countries are required to reduce GHG emissions by 5.2 per cent below their 1990 levels between 2008 and 2012. The agreement does not mandate reductions by developing countries. However, developed nations have already begun a desperate drama to find a way to "globalise" commitments - that is, getting their lesser privileged counterparts to share their burden of cleaning the environment. The powerful North wants the South to commit by way of "voluntary reduction". Despite strong opposition from the developing economies, the focus beyond the Kyoto conference has been on how the latter can participate in the reduction of GHG. The developed countries' stratagem - getting a few to accept "voluntarily" commitments - is nothing but a ploy to break resistance from the developing countries.

At the recent Third Conference of Parties (COP-3) held in Bonn, the United States, European Union (EU), Canada, Australia and Japan closed ranks to mount pressures on developing countries and called for "global participation". Australia expressed concern that "all scientific evidence indicates that actions by Annex I (industrialised) countries alone would be insufficient". The US said this was clearly due to the "small number of parties involved". The EU cued interest in holding discussion with "all" parties at the Fourth Conference of Parties (COP-4) and beyond on commitments. By declaring its intent, in earnest or not, to cut down emissions, South Korea has offered itself to be a showpiece for the industrialised nations to present at the COP-4 in Argentina.

The onus is now on developing countries, especially China and India, which have a high population level and low per capita income, to act as a negotiator on behalf of the South. The fate of the South should not be left at the hands of nations like Costa Rica, Brazil, Argentina or South Korea - that is, countries with a comparatively high per capita income among the developing nations. Putting curbs on emissions by the South only provides the North an easy way of meeting their targets. What non-Annex I could gain via voluntary commitments would only be short-term gains through trades that would buy their future rights to the atmosphere at the lowest exchange cost possible.

The North has only sought to apply the "divide and rule" policy, that is, divide the South. Lure them with sops and get at least a few to accept obligations they are not required to undertake. Thereafter, make a song and dance about their commitments and put pressure on the rest of the developing nations to accept the same. This game is being played neither in the interest of winning adaptability capacity for the South, nor in the interest of curtailing emissions. The idea is only to propose "global action" to subsidise the cost and burden of taking local action in the Annex I countries.

South Korea's move has opened the doors for Annex I countries to engage in emissions trading with nations like Russia and India. The level of industrialisation in these countries is very low, and the technology used is obsolete. By trading with them, Annex I countries could maximise benefits with minimum cost. Under the protocol, Japan has to cut its emissions by 6 per cent. It has already announced measures to help its firms seek joint implementation options in other countries to cut the burden of meeting what might be a difficult target for Japan.

Despite opposition from Group of 77 and China, Argentina has proposed including "voluntary commitments" on the COP-4 agenda. The proposal, especially after South Korea's announcement, would serve the interest of the North very well. Their strategy has come to be spelt by the rules of denial and negation. Deny all responsibilities. Negate all action. Promise to take the lead, but play no role. This has come to be apparent no more obtrusively than in the area of environmental governance.