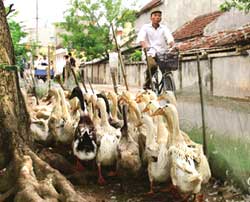 chinese scientists have come out with an improved live vaccine to protect poultry and other birds from avian flu. Developed at the country's Harbin Veterinary Research Institute, the vaccine also protects birds from the Newcastle Disease.

According to the Chinese agriculture ministry, this is the first vaccine that offers protection against two of the worst poultry diseases. The vaccine costs barely a fifth of current treatments, and scientists are hopeful that it could also help provide the basis for human protection against the deadly h 5 n 1 strain of the flu-causing virus.

The vaccine has been given the go-ahead for mass production and a billion shots will reportedly be produced by the end of January. The vaccine can be given by injection, orally or nasally.

While China may also be targeting a lucrative export market (following the threat of a pandemic), its domestic demand is also fairly large. Chinese officials say only about half of its domestic poultry -- some 14 billion chickens and ducks -- is vaccinated till date.