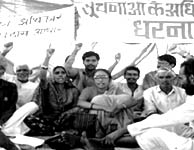 on october 2 this year , the people of Bilaspur division in Madhya Pradesh will get right to information regarding public distribution system ( pds ) following a significant order given by the commissioner of Bilaspur, Harsh Mander on September 9. It is the first time that the state is taking a step in this direction.

The September 9 order begins with a very significant statement, "Protection of the interests of the common citizen and control of corruption is possible only through transparency in governance. Right to information is an inseparable part of transparency in governance, which is also inherent in fundamental rights in constitution and the state government is committed to the same." Said Mander to dte , "The chief secretary has committed that very soon the same right will be given to all the people in the state."

As per the new order, a citizen can demand copies of stock register, sales register or ration card register relating to a period of last three months from a sub- tehsil level office after giving an application and a fee of Rs 5 per page. The elaborate order says that the tehsildar (sub-district officer) or deputy tehsildar will provide the necessary photocopies to the applicant within five days of receipt of application.

The order also mentions in detail how the persons responsible for delay in providing information will be fined on three occasions, with the fines increasing with each delay. The fourth delay will lead to suspension of the erring official.

The most important clause in the order, according to Nikhil De of Majdoor Kisan Shakti Sangathan, Beawar, Rajasthan, which has been spearheading the right to information campaign in the state, is about photocopying. The Rajasthan government has been consistently refusing to give photocopying rights to the people demanding right to information on the grounds that it is impractical as photocopy machines are not available in villages. The Bilaspur commissioner's order says that if the tehsil or sub- tehsil level office has a photocopy machine, it will be used for providing photocopies to the people. Where the office does not have photocopy machines, unemployed educated person(s) will be given aid to set up a machine before October 2.