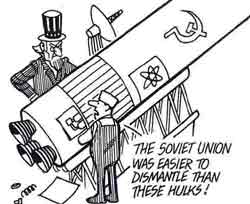 UKRAINE might ratify the nuclear non-proliferation treaty (NPT), but it must be accorded special status as a "transition country" -- one with nuclear armaments on its territory that are in the process of being destroyed, says defence minister Konstantin Morozov.

Western experts rate Morozov's offer as a bid to find the middle ground between Ukrainian hardliners who want to reject the NPT and declare their country a nuclear nation, and US insistence that Ukraine fulfill its pledge last year to become nuclear-free. Nationalist sentiment is particularly strong in the Ukrainian parliament, where euphoria over independence has given way to mistrust of Russian intentions.

Ukrainian President Leonid Kravchuk has shifted to a hawkish stance on the nuclear issue recently by saying his country should claim ownership of the nuclear weapons on its territory, which was now with Russia. He had agreed last year to unequivocal ratification of the Strategic Arms Reduction Treaty (START-I), a 1991 agreement between the United States and the Soviet Union on reducing nuclear warheads, and the 1970 treaty to prevent the spread of nuclear weapons. And, the country's Prime Minister Leonid S Kuchma, who headed Ukraine's biggest missile factory before entering politics recently, wants Ukraine to declare itself a nuclear nation and hold on temporarily to part of the former Soviet arsenal.

However, with Russian authorities now claiming control of Sevastopol, the main base of the former Soviet Union's Black Sea fleet, the possibility that Ukraine will freely yield nuclear weapons left behind with the break-up of the Soviet Union seems remote. The chairperson of the Ukrainian foreign affairs committee, Dmytro Pavlychko, asks, "How can we give up our nuclear missiles to a country that has asserted territorial claims against us?"

Ukraine's stance on nuclear weapons is considered crucial because if it continues to be adamant, it could scuttle the follow-up START-II treaty and increase regional tensions.

Meanwhile, officials in the Ukrainian capital of Kiev disclosed they have begun dismantling 10 of the country's 176 intercontinental ballistic missiles, confirming a report in the Moscow daily Izvestia.