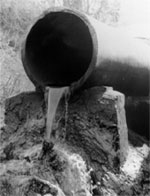 in the second week of February, the vigilance squad of the Delhi government sealed seven automobile service stations and issued closure notices to three others. Among the service stations sealed by the, led by sub-divisional magistrate A V Prem Nath, were authorised service stations of companies like Ashok Leyland and Daewoo Motors. While this drive is definitely laudable, the squad has turned a blind eye to the pollution generated by the Northern Railways' service station at Tughlakabad in New Delhi.

This service station is a major source of pollution because large amounts of untreated diesel and used oil are allowed to flow into the Yamuna. The service station was started in the early 1970s, and till 1981 there was an effluent treatment plant ( etp ). The area where the etp was installed is now a vacant spot, without any sign of the equipment."This was a very old plant and now we are planning to get a very sophisticated unit," says S K Sharma, one of the officers at the workshop.

A visit to the Tughlakabad service station revealed that there are two pipes that divert the waste oil from three workshops into a drain that opens into the Yamuna near Badarpur. The service station conducts in-house testing to determine the level of toxicity in the water. A little ahead of the service station, there is a new refining plant that began operations in September 1999. Here the used oil (including lubricants) are treated with acid, leaving sludge as residue. In an interview to a news agency, senior divisional mechanical engineer (diesel) Ajay Kumar Rana had said that the oil used in the workshop is filled in barrels and refined. After that it is utilised for inferior services like lubrication. Over 90 per cent of the oil is used, the remaining is disposed of safely, he claims.

Yet, this was not entirely true till the end of 1999. It was only after the new refining plant came into operation that three pits with concrete walls (that prevented seepage) were dug to deposit the sludge. Earlier, at the old refining centre, the sludge was dumped into "huge open pits without any protective concrete walls and then covered." Needless to say, such dumping could have led to seepage and contamination of the groundwater in the area.

However, S K Sharma, in charge of the refining unit, hardly considers this a problem. Pointing to the heaps of sludge, he says, "Once it rains, these will turn into soil. If there is any little amount of oil left, it will go into the ground." This is certainly not good news for the quality of the groundwater in the area. The problem is further aggravated by the fact that the area is formed of Alwar quartzite, which means there are fractures through which there can be some seepage. A senior scientist with the Central Ground Water Authority, on condition of anonymity, confirmed, "Even if there is some concrete covering around the pit, we cannot rule out the possibility of seepage. And if the sludge is deposited in the open ground, the contaminants may leach downwards."

Besides the one at Tughlakabad, the Northern Railways have three other official workshops at Nizammudin, New Delhi and Old Delhi railway stations. All the four service stations discharge pollutants into the Yamuna. However, etps have not been installed in these units. Repeated requests for comments on this issue from senior divisional mechanical engineer (diesel), Ajay Kumar Rana, were turned down.