Organic cotton is catching on 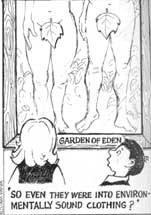 AND, NOW, it's environmentally conscious fashion designers. Advocating a switch to environmentally friendly cotton with brand names like Green Cotton 2000 and dissuading consumers with posters proclaiming "Danger Cotton", US fashion designers are promoting organically grown cotton in a big way, says Pesticide News (Issue 16, 1992). This has brought haute couture in close proximity with an unlikely lot of people -- the sons of the soil.

In USA, second only to China in cotton-growing, an unusal conference was held earlier this year -- fashion designers and garment manufacturers met with farmers to discuss how pesticide use could be reduced. About 25 per cent of all pesticide applications worldwide is for cotton. In India, 5 per cent of all cultivated land is devoted to cotton, which uses as much as 55 per cent of total pesticides.

Cotton is an export mainstay for many poor countries, but its prices have been falling in real terms over the past two decades. One tonne of cotton it bought in 1982 one-third the oil it could buy in 1972. And, in 1992, it bought even less oil. Faced with firecely protectionist measures such as multi-fibre arrangement (MFA) quotas, countries find it easier to export raw cotton or so called grey cotton cloth.

Using pesticides on cotton caught on quickly in the early 1950s, especially as cotton has a relatively long maturing period and is vulnerable to insects. Cotton- farmers usually spray pesticide between 30 and 45 times per season, but insects are becoming increasingly resistant to the chemicals.

The fashion industry now wants orgnically grown cotton and is willing to pay a premium for it. US-based Esprit has developed a line of environmentally sound clothing that it markets under the label Eco-llection. The California Institute for Rural Studies has developed a range of organically grown cotton plants that have been bought by the high-flying Levi Strauss designer firm. In UK, top designer Katherine Hamnett has launched Green Cotton 2000 and Novotex, a Danish firm, which has been using orgnaic cotton for years, owns the trademark -- green cotton.

But the last word in organic cotton belongs to US President George Bush, who said at a recent election campaign meeting, "If you're looking to restore America's moral fibre, why buy synthetic when you can get real cotton?" Why, indeed, especially if this is all it takes to improve morals.