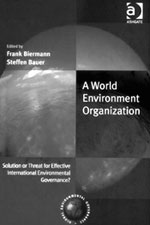 Deliberations on a possible World Environment Organisation (weo) began more than thirty years ago, following the 1972 un Conference on the Human Environment in Stockholm. However, there has been little consensus over the viability of such an organisation, and it seems that it will be some time until a proposal -- both viable and agreeable to the majority of parties concerned in the debate -- is framed.

At the same time, only two of the 30 specialised agencies of the un are specifically mandated for environmental purposes -- the United Nations Environment Program (unep) and the Commission on Sustainable Development. Both have been compromised by vague and ineffective mandates; persistent under-funding has also plagued them.

It goes without saying that reform is needed. But do we need a weo for that? The book under review tries to answer this question by giving us an overview of the weo debate. Three articles support the creation of the organisation, three oppose it and two provide general analyses of the general state of global environmental governance.

The contributors to the volume do not arrive at a consensus. But as the editors comment in their concluding chapter, this book is about the need for further research on the organisational aspects of international governance. It intends to inspire this research.

All their disagreements notwithstanding, the contributors do agree over a few points. First, there is concord over the insufficient mandate given to agencies concerned with global environmental governance. Secondly, the contributors agree that this insufficient mandate works to the detriment of developing countries: they face major negotiating problems in global fora. Lastly, there is agreement that institutional reform, however necessary, is no substitute for political action.

The proposals for a weo can be categorised into three models. First, there are those who want the unep to be upgraded. A second group of proposals goes slightly further and suggests a streamlining approach that would integrate existing global environmental agencies and programmes into one all-encompassing weo, in a manner that could loosely follow the integration of diverse multilateral trade agreements under the World Trade Organisation. The most far-reaching model is to create a intergovernmental organisation, equipped with decision-making as well as enforcement powers, to deal with states that flout international environmental agreements.

Some see this organisational tinkering as a distraction from, and possibly an impediment to, more effective international governance. Another group contends that there is absolutely no need for a weo. They argue a clustering of international environmental agreements -- for example, a conservation cluster, a global atmosphere cluster -- can fit the bill as much. Finally, there is the argument that the unep has too little money, too few staff and too much to do. The proponents of this view hold that are good reasons that these problems would also ail any new institution of global environmental governance.

These shortfalls apart, A World Environmental Organisation; solution or threat for effective international governance is a must read for those trying to understand the debate on the weo.