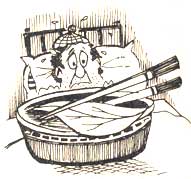 MEDICAL practitioners in the West are resorting to traditional oriental medical systems in seeking to cure diseases that do not respond to conventional treatment.

British dermatologists say they have confirmed that traditional Chinese herbal therapy can be used to treat resistant skin diseases such as atopic dermatitis (The Lancet, Vol. 340, No. 8810).

The fundamental principles underlying this treatment, which is individualised for each patient, were first described in the Huang-di Nei-jing (Inner Classic of the Yellow Emperor), compiled by unknown authors between 300 BC and 100 BC. Scientists discovered that patients who consumed a decoction of certain herbs responded well, with only mild sideeffects. Herbal remedy works well with patients suffering from a particular type of dermatitis wherein there was no obvious infection. But it is not known whether it is effective with other types of dermatitis, especially where infection is recurrent. Scientists also have a limited understanding of how these herbs actually work. Some, they have found, have anti-inflammatory properties, while others act as sedatives, some have anti-microbial action, and at least one has been shown to suppress immune reaction.