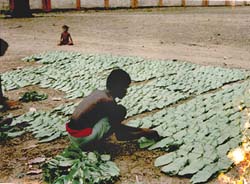 on april 24, 2007, kendu leaf (used for rolling bidis) workers in Orissa ended their strike after the government fulfilled two of their demands. They had started the agitation on April 18 asking for, among other things, a hike in wages and salaries. The government increased the workers' wage from 23 paise to 25 paise per bundle of 20 leaves, and the salary of seasonal workers by 25 per cent. This revision is expected to benefit an estimated 18,00,000 workers in the state to the tune of Rs 10 crore annually.

The collection season extends between April and May every year and the April 20-30 period is when the quality of leaves is at its best and collection the highest. "With the kendu leaf workers protesting during the peak season work in over 8,000 collection centres had come to a halt," says Jogendranath Tripathy, general secretary of Kendupatra Karmachari Sangh, an apex body of kendu leaf workers.Nationalised in 1973, kendu leaf trade has been one of the main economic activities of people in Orissa's hinterland.

Subash Mishra, conservator of forests (kendu leaf), is sympathetic to the cause of the wageworkers. "The government has suffered huge losses. If such conditions (strikes) continue, the trade will collapse in a few years, affecting them. The credit for the trade goes to pluckers, bush cutters, binders and sellers. The government takes care of their interests well but there are certain categories of seasonal workers such as guards, clerks, checkers, circle checkers and head checkers, who just add to the establishment cost," says Mishra.

He also says that demand of kendu leaf has fallen in the international market as at least three countries--Pakistan, Afghanistan and Sri Lanka--which imported kendu leaf from Orissa are not importing anymore. Now, the government sells the leaves at throwaway prices, he says.

Also, Mishra feels that working cost of the trade should be reduced and that seasonal workers should be kept out of the purview of the Industrial Disputes Act, 1947. This is because the government suffers losses fighting disputes on behalf of the seasonal workers.

Besides, the kendu leaf wing of the Orissa government should look into the sale aspect to reduce costs. At present, the Orissa Forest Development Corporation manages the sale.

According to Sanjay Patnaik, director of Regional Centre for Development Cooperation (rcdc), an ngo, Orissa produces the best quality leaves in the country. However, he says the reason for decreasing productivity is due to inadequate cover of bush-cutting areas.

"The grant for bush cutting has not been increased but wage has been hiked from time to time. Which means, the same grant is distributed among lesser number of workers and hence less area is covered for bush cutting, affecting productivity," says Pradip Mohanty of rcdc.

He also says that the wageworkers hardly get to reap the benefits because most often, there is no link between the manufacturers and them.