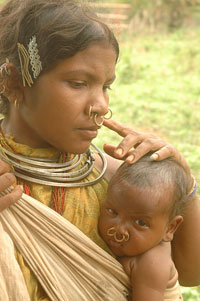 Under pressure from the Union Ministry of Environment and Forests (MOEF), the Orissa government has initiated the process of settling the community rights of tribals over forests in and around the Niyamgiri hills in Orissa's Kalahandi district.

The move follows the recent visit to the area by N C Saxena, head of the four-member committee formed by MOEF to look into mining related issues in Niyamgiri where the Dongria Kondh tribals live. The tribals have been resisting multinational mining corporation Vedanta's attempts to mine bauxite from the Niyamgiri hills to feed its one million tonne alumina refinery at Lanjigarh. The Orissa chief secretary Tarun Kanti Mishra assured that allegations of forest rights violation by the company would be inquired into.

“ I have received 10 community claim applications during the last one week and have asked the forest officials to prepare the maps of the respective villages following which gram sabhas would be called to discuss the claims,” said Kalahandi sub-collector, Nand Kishore Sethi. He refused to explain why the government was sitting on the matter for such a long time. Only four to five community claims under the the Forest Rights Act of 2006 have been settled in the past.

Vedanta's hopes of getting a second stage clearance to commence mining received a blow in January this year when a three-member committee of MOEF expressed concern over the likely adverse impact of mining on the biodiversity of Niyamgiri area and its tribal residents after a field visit. This prompted the ministry to set up another committee under N C Saxena, a retired bureaucrat and member of the National Advisory Council, to examine the matter in depth.

Sources said during his visit to Lanjigarh and Niyamgiri on July 7 and 8, Saxena met local residents and public representatives many of whom alleged denial of forest rights to the tribals and illegal cutting of trees by the company to widen roads in the area ( see 'Vedanta fells trees', Down To Earth, February 28, 2010). The president of Kalahandi Sachetan Nagrik Manch, Siddhartha Nayak accused the district officials of refusing to accept community forest rights claims of the people.

On his return from Lanjigarh to Bhubaneswar on July 10, Saxena met the state chief secretary to review the matter. Chief secretary Mishra later said that government would inquire into allegations of violation of forest rights in the area as it was keen to ensure that people were not deprived of their rights. Expressing hope that the process of settling claims would be completed within two months, Mishra said concerned gram sabhas would be consulted. Vedanta has been slammed by international human rights groups and the Church of England for violating the rights of the Dongria Kondhs.

People are sceptical about Orissa government's softened stance towards the tribals. Former chairman, Lanjigarh block, Khirabdi Sahu said “ experience of the past suggests the government never keeps its word in such matters. We will believe them only when they complete the process and people actually get their rights.” He also asserted that Kondh tribals of the area would continue their agitation against Vedanta.