Thanks to gallium nitride, it is now possible to develop bulbs that can last a lifetime 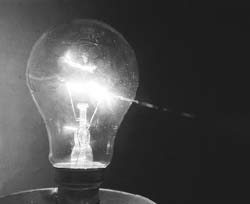 imagine a light bulb that you may never need to replace; a compact disc which stores all your favourite melodies and electricity bills which get halved. All this seemed to be a distant dream, but thanks to gallium nitride - a human-made material - it may be possible to manufacture bulbs that would last for 100,000 hours as compared to the conventional light bulb which usually last for 1,000 hours.

Colin Humphreys of the University of Cambridge, uk , has developed Light Emitting Diodes ( led s) or light bulbs made from gallium nitride. They consume less than 20 per cent of the power of traditional light bulbs to give the same brightness. Gallium nitride is probably the most significant discovery since silicon. It has the potential to revolutionise the electronic industry.Physicists all over the world are competing to grow this material that can be used to produce light bulbs as well as compact discs (cd s ) and in construction of super-efficient power stations.

Gallium nitride emits an intense blue light. When indium - a silvery while metallic element - is added, the material emits light of any desired colour depending on the amount of indium added. Gallium nitride can also produce brilliant blue lasers. Today cd s and optical discs are written and read using red lasers. Since the shorter wavelength of blue light means possibility of higher storage density, cd s and optical discs are likely to be written and read using blue lasers within the next five years. It may thus expand the potential market for blue lasers.

These led s are being tested on traffic lights near Bristol and in Marsham Street in London. Since the traffic bulbs have to be replaced every six months, the use of led s will provide considerable saving in maintenance cost because these led s last for ten years of continuous operation. Moreover, the energy saving in the uk from using led traffic lights is equal to that of two medium-size power stations. The use of these led s even result in substantially reduced carbon dioxide emissions, claims Humphreys.

When a blue led is coated with a phosphor, a synthetic solid florescent substance, a white light is produced. These white led s may in future replace light bulbs and fluorescent tubes in homes and offices. Humphreys claims that gallium nitride can also be of immense use for high power transistors in mobile phones giving them a much greater range than what it is today.