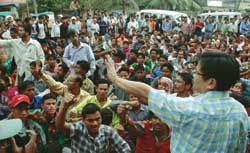 the Assam government has sounded a health alert across the state following an outbreak of malaria that has claimed at least 35 lives and affected more than 20,000 people over the past month. Unofficial estimates put the toll at around 80. Behind the outbreak is the laxity of the administration and a spectacular scam. People in affected areas have also risen in protest.

Most of the casualties were reported from the eastern districts of Golaghat and Lakhimpur, as well as areas bordering Bhutan. State health minister Bhumidhar Barman says medical teams are working to check the disease, but the public remains unconvinced.

On April 24, 2006, hundreds of people from Doyang and Tengali -- two of the worst-affected villages in eastern Assam -- staged a violent protest in Guwahati. The protesters, led by the Krishak Mukti Sangram Samiti (kmss), were demanding immediate preventive measures. They criticised the state health machinery for failing to run the malaria-control programme, especially in villages. Health officials, however, blame villagers for the increasing death toll. Villagers, they say, delay bringing patients to hospitals decreasing their chances of survival.

While the state and the central governments claim they are leaving no stone unturned to curb the disease, programme implementation has not been great. A glaring example is the non-distribution of insecticide treated mosquito nets. Between February 9 and April 7, 2001, the joint director of the health services (malaria), Assam, received around 500,000 nets as part of the malaria-control programme. Of these, 485,000 were to be issued to 22 districts for distribution among people below the poverty line; the rest were to be kept by the state government for emergencies. But towards the end of April that year, the central government issued a directive to withhold distribution, without assigning any reason. Since then, the nets have been rotting in warehouses. There are other problems. "Patients have not been given free drugs, though chloroquine should be free, and ddt is never sprayed," says A Gogoi of kmss. Officials say they don't have stocks.


India's northeast region is a known malaria zone with the disease claiming an estimated 500 lives annually. Instead of taking concrete steps to combat the situation both the central and the state governments merely pay lip-service to the malaria-control programme. No benefits reach remote areas like Tengali in Golaghat district. Tengali and Doyang are the areas where the first cases of malaria were detected this year. Critics say this is because of the callous attitude of the district administration, but health experts blame the early monsoon for the outbreak.

The early monsoon apart, what is worrying the health officials is that anti-malaria drugs like chloroquine are not working. Reports of drug-resistant plasmodium from the area have increased. There are two varieties of malaria parasites -- Plasmodium vivax and Plasmodium falciparum. The latter, which is spreading, is resistant to chloroquine. In Golaghat district at least 400 people have been affected by P falciparum. An expensive drug, artemisinin, has to be employed to control the fever. Recently, who recommended a combination of drugs for the disease, which cures both variants. But though falciparum is rampant, authorities are supplying only chloroquine.

After an outbreak in 2005, the Assam government had asked the Centre to rush stocks of rapid diagnostic kits (rdk). The biggest problem health officials face is differentiating between P falciparum and P vivax, says K Neog, chief medical and health officer of Golaghat district. "With rdks the treatment will be more accurate, which will help curb the disease," he adds.

At the moment affected areas are seeing little action on behalf of the administration.