Around the Tibetan plateau 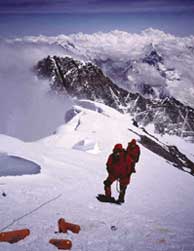 news reports on ozone depletion are frequent. But a study from the department of chemical and physical sciences at the University of Toronto, Canada, discusses the presence of excess ozone around the Tibetan plateau.

The research team, led by G W Kent Moore, says that a concentrated ring of ozone sits around the plateau, which rises 4,000 metres above the sea level. Its ozone concentration is as high as levels in heavily polluted cities, they add. Ozone is a highly volatile gas that, at high concentrations, can cause coughing, chest pain and damage to the lining of the lungs.

John Semple, a co-author of the study, who is also a mountaineer, has been collecting data on weather and atmospheric changes with altitude since 2004, when he climbed the Yeli Pass in Bhutan. He found that the levels of ozone were rising instead of falling at altitudes of 3,000-5,000 metres (pollutant levels normally fall with increasing altitude). Moore examined satellite measurements of ozone concentrations above the plateau during October-November from 1997 to 2004. He discovered that while ozone levels were low over the centre of the Tibetan plateau, the gas formed a halo around it.

The scientists believe that the halo is the result of a pattern in fluid dynamics known as a Taylor column -- a phenomenon normally seen underwater. The column is formed when water passes around a submerged obstacle, like a seamount.

In this case, says Moore, the plateau acts like an obstacle, creating a column of stagnant air above it. The ozone ring was probably formed because the plateau's influence extends into the ozone-rich upper troposphere and the lower stratosphere.