A four-atom oxygen molecule might make for good fuel 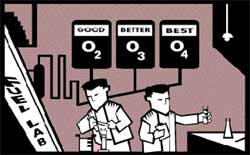 scientists in Italy have discovered a new form of oxygen. In addition to the two well-known forms -- ozone and the oxygen molecules in air -- there is a third, they say, in which oxygen atoms are grouped in fours. If these results bear out then we might have a better fuel source for the future.

The oxygen molecules that we breathe (denoted O2) consist of two oxygen atoms. This, the most stable form of oxygen, makes up about one-fifth of air. Ozone is more reactive and comprises three oxygen atoms (O3). It is formed in the atmosphere in small quantities when sunlight splits O2 into its component atoms, which then recombine(www.nature.com , November 16, 2001).

Now Fulvio Cacace and colleagues at the University of Rome 'La Sapienza' have produced evidence of O4 . The existence of such a molecule has been predicted since the 1920s, but extensive searches for it have yielded only tentative previous sightings.

Several chemical elements exist in more than one form or 'allotrope'. Carbon, for instance, forms diamond and graphite, as well as hollow, cage-like molecules called fullerenes and nanotubes. The atoms are arranged differently in each of these forms.

The interest in new oxygen allotropes is not purely theoretical. Liquefied ordinary oxygen (O2) is used as a rocket fuel (called lox), as it reacts energetically with fuels such as hydrogen and hydrocarbons. As the O4 allotrope packs a lot of oxygen into a small space, it might be even having greater energy. O4 might also make a fleeting appearance in atmospheric chemical reactions that are responsible for the phenomenon of 'nightglow' on Earth and other planets.

To prove conclusively that they had identified O4 , Cacace's team used mass spectrometry. This technique separates a mixture of electrically charged molecules, or ions according to their mass and charge.

The researchers combined O2 molecules and positively charged O2 ions to produce O4 ions, which are identifiable by being four times as massive as oxygen atoms. They then added an electron to each O4 ion, transforming it in to a neutral molecule. After a short interval, the team stripped an electron from each O4 molecule so that they could detect them again as ions (neutral molecules are invisible to mass spectrometry).

They reasoned that if the neutral molecules were sufficiently stable, they would show up when re-ionised, as indeed they did. What O4 looks like is still a mystery. Earlier theoretical calculations suggested two possibilities: a rhombus-shaped molecule with an atom at each corner, or a triangle of atoms with the fourth in the centre. But neither of these options fits the researchers' results very well. Instead, they think that O4 is probably composed of two dumbell-like O2 molecules that are loosely bound together.

Whatever is the shape of O4 molecule, if the researchers are right it could change the shape of alternative fuel technologies in the future.