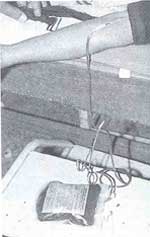 Amritsar has been plunged into an acute shortage of blood. Three major blood banks, which are the main suppliers to the hospitals and clinics in the city, were sealed by the district administration on February 16 on a complaint that a person tested HIV positive after receiving blood. Inderjeet Singh, injured in a road accident, was verified HIV negative in a test conducted at a private nursing home at the time of admission. Later, after receiving 15 units of blood supplied by the three private blood banks, Singh tested positive.

The administration has set up a four-member team to review the working of all blood banks in the city and carry out sample tests. J G Jolly, member of the National AIDS Control Organisation and chairperson of the subcommittee on blood transfusion, commended the district administration on its swift action but pointed out that blood banks in other cities were no better.

Ironically, the effort to save lives has put other lives in peril. Says Gurbir Singh, a resident of Amritsar, "We could not find blood for my sister who had an accident on February 20. Finally, we had to bribe a person in a blood bank to get two bottles."