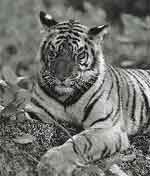 as the countdown to the 50th anniversary of India's independence progressed, 320 Members of Parliament ( mps) signed an appeal to the Prime Minister to save the tiger whose numbers have fallen drastically over the past 50 years. The signatories comprised 98 members of the Rajya Sabha and 222 member of the Lok Sabha, including two former prime ministers, Chandra Shekhar and Atal Behari Vajpayee.

The appeal was originally part of a newsletter of the Tiger Link, a 600-member Indian network of "concerned people and organisations to save the tiger". A Tiger Link spokesperson claimed that the appeal received broad-ranged support as the signatories belonged to 22 political parties covering 24 states and union territories.During the Convention on International Trade in Endangered Species ( cites ) held at Harare, Zimbabwe, in mid-June, the same network had collected signatures of 250 mps to thwart a South African move to legalise trade in rhino horn.

The mps urged the Prime Minister to initiate new and immediate reforms in tiger conservation. They asked for "reforms in the mechanisms of administration, funding and enforcement". The concern is to save the tiger, the most popular symbol of national environmental heritage, in its threatened habitats spread over the country. Threat to tigers in India, despite stringent laws, has attracted the attention of conser-vationists worldwide. Dave Curry, director of London-based hard line conservation group Environmental Investigation Agency ( eia ) in a 1996 report titled Political Wilderness, India's Tiger Crisis alleged that the tiger con-servation in India was ineffective and poaching was rampant.

Project Tiger, the national tiger conservation programme, was criticised last year by mps for failure on many counts. Meanwhile, organisations such as the eia and their Indian counterparts have been calling for more stringent conservation moves. But in protected areas, the mood is diametrically opposite. Local villagers have often questioned and protested against harsh laws that curtailed their access to forests for collecting fuelwood and minor forest produce for survival. There are several movements for people's management of forest and forest resources.

Considering the complexity of the issue, the mps' impassionate plea sounded somewhat simplistic: "Prime Minster, the future of the tiger lies in your hands. Its extinction will herald a downward spiral of ecological decay which can only escalate the misery of millions. There is not a moment to lose."