Parking a car can be fatal 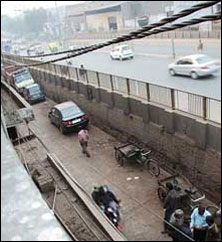 On december 9 , one side of Anand Parbat, a bustling industrial hub in west central Delhi, looked deserted. Notices stuck on several factory doors informed visitors about the cremation of Rajkumar Sehdev, 57. A heart patient, Sehdev had died the previous day after a row with his neighbour over parking.

Sehdev’s company supplies spare parts to automobile companies. On December 8, Sehdev’s elder son Rajat, 27, found two cars parked in front of his premises when he drove to work. The cars belonged to their neighbour, Bhojraj Kansal. There was no space for Rajat’s Honda Civic. An altercation ensued. It was settled on the intervention of relatives and friends. Bhojraj removed one of his cars.

A little later Bhojraj, his two sons, their neighbour Palchand and his son barged into Sehdev’s premises. They allegedly dragged out Sehdev and his younger son while raining blows on Rajat. “Palchand was yelling they would finish off my father and incited his son to hit my father as he was a heart patient,” alleged Rajat. He added that the accused persons jumped on his father when he fell and kicked him on the chest several times before leaving. Raj Kumar was unconscious and declared dead on arrival at the hospital.


“Bhojraj Kansal and his two sons have since been arrested and booked for culpable homicide,” said Anand Parbat station house officer (sho), Dinesh Kumar. The post mortem report of Sehdev, opened in the court on December 19, said 90 per cent of Sehdev’s arteries were blocked and the body bore some injury marks.

At the time of his arrest, Bhojraj told media persons it was Sehdev’s sons who had beaten him and his sons.

Parking brawls have become frequent in Anand Parbat after police started slapping challans on those parking their cars on the main road two months ago. The sho said he has received four complaints of parking brawls in the past few weeks.

“There is no parking space and tempos too use the lanes to load and unload goods,” complained Beer Singh, of the factory owners’ association.

Anand Parbat houses over 2,000 small-scale industries and is one of the 20 unplanned industrial areas in the city notified for redevelopment. “After the redevelopment plan is prepared, the municipality will provide a common parking area,” said Suresh Chandra, the zonal superintendent engineer of the muncipal corporation. But increasing parking supply is not the solution; public transport should be strengthened instead said Sujata Sawant of the engineering consultancy enterprise, rites.