Even for adroit forgers, goings will become hard as a new fingerprint recognition system may replace passwords in the near future 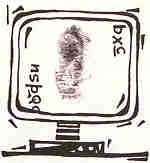 The company, Cambridge Neuradynamics, which grew out of projects investigating pattern- matching techniques in Cambridge University's department of engineering, claims to have perfected a us $350 fingerprint scanner that can be used to control security doors to verify a person's identity.

The company's managing director Mike Welch told the press that the installation of this unit could end fears about the theft of passwords in offices and among people shopping on the World Wide Web. Since each finger- print is unique, it can be verified instantly when the system demands, and companies can make sure that the right person is present when an order is being placed.

Trial units are now installed in the financial sector. They are being used to verify that people are who they claim to be, but future uses could include fingerprint passes, replacing identity cards in offices. One African state, which Welch says he cannot name for security reasons., is installing the fingerprinting equipm~nt to crack down on people who apply for multiple passports.

Each time a passport is issued, a digital fingerprint will be record~d. A print-retrieval and search system devel- oped by the company, which runs on speeded up PCS, can then automatically search through as-many as five million separat~ fingerprint records and pick out any duplicates in five to 10 minutes.

According to Welch, "there is some political sensitivity about using finger- prints for civilian purposes, especially in the UK. But elsewhere a lot of companies have shown interest. Political and tech- nological arguments "about fmgerprint systems in the uKhave SO far thwarted efforts to produce a national database of prints for police use. " Automatic fingerprint recognition has been around on older systems for some time, but what we offer is cheaper, because of the PC hardware, and much more accurate. It can pick up- similarities in prints which would otherwise have gone undetected."