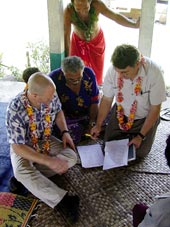 Samoa has sown the seeds of a bitter intellectual property rights battle in the Pacific region, claiming sole rights over a gene-sequence found in the mamala tree (Homalanthus nutans) used to make the aids and cancer drug prostratin. But the tree grows widely across the Pacific and has been used traditionally in Fiji, Tahiti, Vanuatu and Australia. Samoa has made its claim under the 1992 international Convention on Biodiversity. It has also signed a 50-50 revenue-sharing deal with the us-based University of California, Berkeley (ucb), which is developing the drug.

The people of Falealupo, a far-western village in Samoa, had passed on knowledge about the tree to ucb botanist Paul Cox. Clark Peteru, a chief in Falealupo, is, however, not happy about his country's move: "Claims of ownership could provoke objections from other countries. This deal is very paternalistic." But Cox says Samoa deserves the right because it is the only country that collaborated openly in research.