Can scan for thousands of microbes in 24 hours 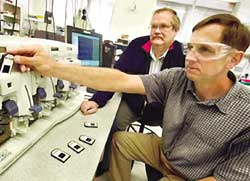 us scientists have developed a chip smaller than a rupee one coin that can scan for thousands of disease-causing microbes in an air sample in just 24 hours. Called the dna Phylochip, it would be especially useful in the aftermath of disasters -- such as floods -- when pathogen numbers show a spurt.

The square-shaped chip has been developed by scientists with the us Department of Energy's Lawrence Berkeley National Laboratory. Packed with an array of 500,000 probes, it can analyse a sample for the unique dna signatures of 9,000 species in two categories of microorganisms -- Bacteria and Archaea, according to microbiologist Terry Hazen.

Phylochip makes its identification based on variations in the 16 srrna gene, which is essential for protein synthesis and is present in all bacteria, says Gary Andersen, another microbiologist at the lab. "The advantage of this approach is that multiple pathogens can be identified simultaneously by targeting unique regions of the 16 srrna gene sequence in the samples."

In addition to bacterial pathogens, the chip would also reveal the presence in samples of bacterial species that are capable of degrading or transforming contaminants of concern. Under the right conditions, bioremediation and natural attenuation can be the safest and most cost-effective environmental remediation technique.