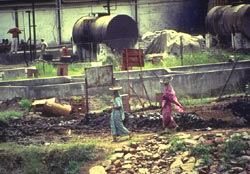 The us Congress has expressed its commitment to work with the Indian government to ensure that the Union Carbide provides complete medical, social and economic rehabilitation to the victims of Bhopal gas tragedy. In a legislation introduced in the us House of Representatives recently, the Congress also pledged to work with the Bhopal victims and the Dow Chemical Corporation, which now owns Union Carbide, towards this end. Frank Pallone, democratic congressman from New Jersey, sponsored the legislation, which also recognises December 2, 2004, as the disaster's 20th anniversary.

The legislation urges Union Carbide to solve the problem of polluted groundwater, toxic waste and contaminated soil in Bhopal. It asks it to ensure clean water supply near its defunct factory, and appear before the Bhopal district court for facing criminal charges.