The cost of environmental degradation is rising steeply in India, says the World Bank 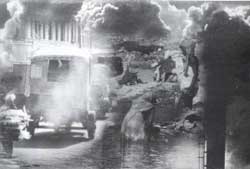 INDIA loses about US $80 billion every year on account of sickness and death from pollution and economic costs attributable to resource degradation, says the World Bank's annual Environmental Review. The loss due to poor environment is pegged in excess of US $20 billion a year by conventional calculations, and nearly US $80 billion in purchasing power parity (PPP) terms, the report says.

Environmental degradation in the region continues to worsen driven by the familiar factors of increasing industrial pollution in urban areas and degeneration from the unsustainable use of land, forest and water resources in rural and coastal areas.

According to the Human Development Report 1998, a conservative estimate in 1996 of environmental damage in India had put the figure at more than US $10 billion a year or 4. 5 per cent of the GDP in 1992. If higher estimates are used, the total environmental cost at that time was around US $13. 8 billion. A breakdown of the conservative costs estimate had shown that urban air pollution cost India US $1. 3 billion a year. Water degradation led to health costs amounting to US $5. 7 billion every year, nearly three-fifths of the total environmental costs.