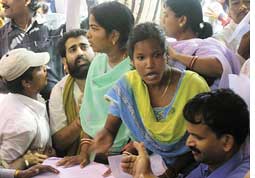 pro- and anti- posco groups in Orissa clashed again. It is alleged that the hand of a 58-year old man of the posco -support group was chopped off on May 14 by project opponents led by the posco Pratirodh Sangram Samiti (ppss). ppss has been actively protesting posco's 12 million tonne steel plant for long. Their contention is the plant will come up on fertile land and displace people from three villages in Jagatsinghpur district in Orissa. Protests have become a regular feature in the state. On April 1, ppss defied government's orders and entered the Balitutha bridge near the plant site (see 'Protests continue against posco', Down To Earth, April 30, 2008).

The latest conflict took place at Gobindpur village under Dhinkia panchayat, one of the villages that faces displacement. Five platoons of police have been deployed in "sensitive" areas such as Balitutha and Trilochanpur but no arrests have been made so far. ppss president Abhay Sahoo says the pro- posco group enjoys the government's support. "On May 14, we had a rooftop meeting in Gobindpur. They tried to disrupt our meeting by hurling bombs but they were beaten up at the spot. We got to know later that someone had lost his hand," said Sahoo.


Police officials claimed the situation was normal. Asserting that the number of people opposing the project was growing, Sahoo blamed the police and the administration for the tension in the area. "Ever since our successful meeting at Balitutha on April 1 they are trying to provoke us," he said. He alleged that after the May 14 incident, the pro-project activists had kidnapped a ppss supporter but they later managed to get the boy released. "They are panicky because they are losing support," Sahoo added.

Radha Kant Sharma, superintendent of police, Jagatsinghpur, says fear factor is driving both the parties towards such activities and gives a different version about the May 14 clash. "Any big gathering makes the other group feel insecure," he said explaining that the attack took place while the project supporters were going in a group to attend a feast and seeing a huge gathering the opposition anticipated an attack and decided to attack first.


posco needs about 1,620 hectares (ha) in the area including about1,443 ha of government land (of which 1,254 ha is declared revenue forestland) and 177 ha of private land, said Shashank Patnaik, spokesperson, posco.

Sources said the company has so far been allotted about 207 ha of non-forest and non-encroached government land, but is yet to take its physical possession.

The government had planned a groundbreaking ceremony on April 1 but had to postpone the programme in view of the continued resistance by the people. But posco claimed that the postponement was because of delay in obtaining some procedural sanctions with regard to the project. It was the same day ppss had organized the rally in Balitutha.

ppss activists have protested ever since the administration conducted a socio-economic survey in the three village panchayats of Nuagaon, Gadkujang and Dhinkia in March 2007. Although local resistance prevented them from undertaking survey work in the Dhinkia, the epicentre of the anti- posco movement, the administration appeared satisfied with the work done in the other villages as it was the first time they were able to penetrate into the project area.

With the resistance movement going strong, there has hardly been any progress with regard to the land acquisition work. ppss activists say they won't budge.

"We hear there are plans to commence work on the project by the end of June. We are determined not to let that happen," said Sahoo referring to the comment of Union Steel Secretary R S Pandey. After a review of Orissa's steel projects recently, Pandey had expressed hope about posco being able to commence construction of its proposed unit in June.