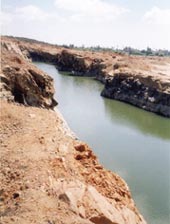 faced with the threat of exposure to toxic waste, the people of a few nondescript villages of Tamil Nadu (tn) exhibited remarkable unity and resolve to register their protest. They were ably supported in this endeavour by civil society representatives.

It was as if a storm hit the Kancheepuram collectorate at 11 am on April 27. More than 600 people, who arrived in a convoy of buses, vans, tempos and two-wheelers, thronged the place for a public hearing on a proposed hazardous waste landfill in Melakottiyur panchayat of Kancheepuram district. The high turnout caught the collectorate officials unawares, as they were prepared to receive only around 60 people. In fact, the overwhelming public response led them to postpone the meeting.

Earlier, an appeal by Kancheepuram district collector R Venkatasan to send in a representative group was rejected. "A public hearing is meant for all the people to participate. How could we agree to just a small group meeting the collector in his office?" says Devanbu of the Association for Community Development Services (acds), a local non-governmental organisation (ngo) that played a major role in mobilising the residents. But Kancheepuram's revenue officer, N Kannan, explains: "We didn't expect such a big crowd. Normally, 50-70 people participate in such events. Had we known about the high attendance, better arrangements would have been made and the hearing could have taken place then itself." Kannan further claims that "many people unconnected with the issue were also present on that day".

This view seems far-fetched since nearly 4000 people reside in the villages that come under the Melakottiyur panchayat, located about 40 kilometres (km) from Chennai. The proposed landfill site is an abandoned 68-hectare stone quarry within 1 km of Melakottiyur. Hyderabad-based landfill specialists Ramky Enviro Engineers (ree) are developing the facility for the disposal of solid waste. "Though ree asserts that the landfill will receive waste only from Chennai, Kancheepuram and Thiruvallur districts, the pollution control board's environment impact assessment report clearly states that waste from all over the state will be dumped here," alleges Shweta Narayan of Community Environmental Monitoring (cem), a Chennai-based ngo.

The waste will include inorganic as well as organic hazardous substances. Apart from this, an incinerator at the site would burn spent solvents; waste oils and related wastes; pesticides; refinery, pharmaceutical and phenolic wastes; organic wastes containing halogens, sulphur, phosphorous or nitrogen; and capacitors containing polychlorinated biphenyls. "We are already grappling with problems spawned by leather tanneries sited in the area. For instance, irrigation has borne the brunt of these industries," points out G Mahalingam, president of Melakottiyur panchayat. "Even two years ago, the people were against this project. We signed an application opposing it. We felt that anything to do with chemicals didn't augur well for us," he adds. Significantly, when the ree had conducted a survey of the area a couple of years back, the panchayat had indeed objected to the venture by sending a letter to the taluk office. "The company (ree) has not bothered to inform the people about the project's details. Its representatives just keep reiterating that we won't face any problems. But can such assurances be relied upon?" asks Mahalingam.

The staunch opposition to the project stems from various reasons. The quarry has three stormwater collection points that provide water for washing and bathing purposes. Besides, there are around four large waterbodies within a 5-km radius of the site, with the Melakottiyur pond located less than 1 km away. "Right now, the quality of water is satisfactory and its supply is adequate. In fact, lorries lug water from here to Chennai. But once the landfill comes up, leaks may spring in it. This, in turn, could pollute the water. The runoffs during rains will also prove harmful," feels Devanbu. The landfill will receive waste from the two leather tanneries as well, which would further contaminate the water. "We were told that there is a major difference in the quality of water here and the place where the tanneries are located," says Narayan. Also, all the hazardous wastes would have to be transported to the landfill via the same road that leads to the village and the quarry.

The notice for the public hearing was issued on March 27. ngos like the Chennai-based Tamil Nadu Women's Collective (tnwc), Toxics Link and cem took note of it, and got in touch with acds. Together, they formulated a strategy to organise the people for the hearing. In this effort, they were extended full support by the Melakottiyur panchayat. From April 12 onwards, representatives of the ngos and the panchayat started touring the villages, meeting self-help groups, cine fans' associations, youth associations and other villagers to garner support.

"The collector told us that though he had conducted 13 public hearings in his career, this was the first time he had seen so many people," discloses Sheelu of tnwc. It may be noted that while the people's participation on such a large scale wasn't expected, the Ramky group was fully prepared with experts and documents. The collector has now promised to hold the public hearing in June. And the people of Melakottiyur have vowed that "more than a thousand" of them will be present this time!