Pepped up by peptides 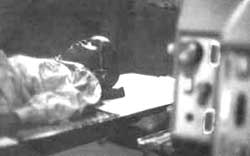 CANCER chemotherapy is, even at the best of times, a pretty tricky business. Doctors are always walking the razor's edge, since the line between killing the tumour and killing the patient is extremely thin. That is because chemotherapeutic drugs targeted to kill the rogue cells first spread throughout the body, reaching not only the tumour but also healthy organs such as the intestines and bone marrow, where they terminate the cells that are perfectly normal. And to make matters worse, the rogue cancerous cells soon mutate and acquire resistance to most of these drugs.

To overcome this problem, scientists have been searching for strategies that would let them target only the cancerous cells and minimise their of chances developing drug resistance. Recently-conducted research by Erkki Ruoslashi and his team of researchers at the Burnham Institute in La Jolla in California, USA, reveals a new method that successfully avoids all these limitations. The researchers have targeted the newly forming blood vessels - the life blood of all cancerous growths. For this job they found certain peptides - small fragments that make up proteins. When these are linked to the chemotherapeutic drug dexorubicin, they can home-in on the cells lining these newly forming blood vessels (Science, Vol 279, No 5350).

Since the toxic drug is addressed only to the tumour, normal tissues in the body are spared. And as the targeted blood vessels around the tumour are not cancerous, they are less likely to develop resistance to the drugs than the highly mutable cancerous cells. Indeed, when the researchers gave these drugs to mice with large tumours, it killed off the blood vessels, thus stopping the tumour growth and allowed the mice to pull through the cancer successfully.

This approach of targeting the newly growing blood vessels to starve the growing tumours to death however is not new. Judah Folkman at Children's Hospital at Harvard Medical School showed last year that inhibiting the growth of new blood vessels, called angiogenesis, can block growth of cancers in animals (Down To Earth, Vol 7, No 3). In fact, Angiogenesis has emerged as of the hottest areas in cancer research today.

Small dormant tumours grow and become dangerous by attracting new blood vessels by angiogenesis. Initially, tumour cells die just as fast as they reproduce. Without proper blood supply they remain about the size of a pea and stay in a dormant stage. After 'sitting' for months or even years, this pea-sized mass suddenly provokes nearby blood vessels to send out new branches or capillaries. This, most experts believe, occurs during menstruation, pregnancy or wound healing. But once the tumour sets this process in motion, it enables them to grow uncontrollably, invading healthy tissues and seeding the blood stream with malignant cells. No one knows how the small tumours suddenly go angiogenic, but researchers have recently learned a lot about the process.

Healthy cells constantly regulate the growth of nearby blood vessels by generating chemical messengers known as inducers and inhibitors. The cells that line blood vessels sport receptors for both types of molecules. Normally, the inhibitors are in larger numbers, but if a few cancer cells stop sending out their share of inhibitors, the cells in nearby vessels start proliferating wildly to form new capillaries. Eventually, these new vessels bore into the tumour and set up a full-fledged supply link with the main circulatory system to bring in fresh nutrients and oxygen - essential for the proliferation of tumours. As the tumour grows, cells can break off and travel through the new vessels seeding distant tumours. Anti-angiogenesis agents slow down the blood vessel growth, wither the capillaries and starve the tumours to death.

In experiments conducted so far on mice, treatment with anti-angiogenesis agents has inhibited the vessel growth and sent the tumours back to their original dormant stage. Some anti-angiogcnesis agents have even shrunk tumours in human beings in clinical trials.

However, there have been no roadblocks. Of the dozen or so best angiogenesis inhibitors are all proteins, which are expensive and laborious to produce in bacteria. Ruoslashi's method overcomes these disadvantages and can possibly be adopted without much difficulty. For one thing, the drug used is already available and approved for clinical use and the peptides used are not very difficult to produce either. Moreover, this technique zeroes in on only the blood vessels of the tumour as the peptides can identify normal blood vessels of other organs. There is an added bonus: the peptides can be loaded with drugs to cart them to other organs as well for treating diverse disease conditions in addition to cancers.

Ferrying drugs to cancerous cells on the backs of other molecules is not a new idea. But the efforts have largely been unsuccessful because often, ungainly molecules like antibodies have been used as the vehicles. The method to use peptides overcame many of the problems in ferrying large protein molecules into the innards of tissues. It took the La Jolla team over two years to master the technique to selectively target the peptide-loaded cargo to specific tissues like kidneys or brains of mice.

The researchers then chose two of the specific peptides and hooked them individually with anticancer drug doxorubicin to see whether the peptides would guide them to the targeted tumours and kill them. They did. When administered to mice that had large tumours derived from human breast cancer cells, even tiny amounts of peptide-linked drugs, were better at stunting tumour growth than doxorubicin was. Some of the mice which were treated even lived as long as six months after their treatment.

According to Bruce Zetter of the Harvard Medical School in Boston, USA, while the drug primarily kills the growing blood vessels it may also diffuse into the tumours and finish them off. Other scientists also believe that anti-angiogenesis therapy will revolutionise cancer treatment. James Watson, the Nobel laureate who co-discovered deoxiribose nucleic acid (DNA), predicts that this strategy might cure cancer by the time we face the new millennium.