Pepper spray: Why it is so dangerous

Corneal abrasions and ulcers are not rare events when patients are exposed to pepper spray, suggest studies 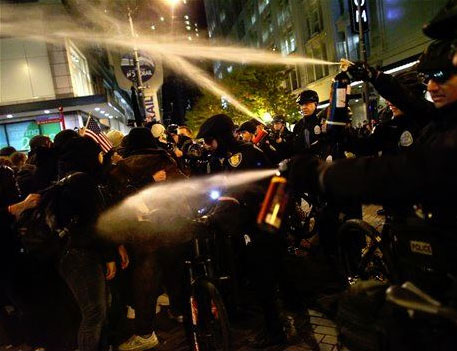 Till now, pepper spray found its use in incidents of violent protests across the world, self-defence against animal or human assaults. But this week, a parliamentarian in India broke all rules and unleashed a can of pepper spray in Lok Sabha to protest against formation of the new state of Telangana. And why not? After all, he hails from a region which produces huge quantity and many varieties of red chilli.

Did he know or did he choose to forget that the spray is not a toy and that it can have both short-term and long-term effects on the health of those who inhale its fumes. The politician later defended the decision saying he used the spray in self defence.

A 1999 paper published by the North Carolina Medical Journal (NCMJ), titled Health Hazards of Pepper Spray and written by health researchers at the University of North Carolina and Duke University, says “pepper spray, or OC (oleoresin capsicum) is an “oily extract of pepper plans of the genus Capsicum.” Those compounds which make these sprays formidable are called capsaicins. Pepper spray has this extract, diluted with an appropriate solvent and the effect of the spray would depend on the concentration of the extract used.

The study notes that when a person’s skin is exposed to OC spray, people can experience “tingling, intense burning pain, swelling, redness, and, occasionally, blistering.” If it gets in the eyes, it can cause pain and stinging — and temporary blindness that lasts 30 minutes or so.  Inhalation of high doses of some of these chemicals can produce adverse cardiac, respiratory, and neurological effects, including arrhythmias and sudden death.

According to a study published in journal Investigative Ophthalmology and Visual Science, the “immediate changes in mechanical and chemical sensitivity” can persist for up to a week but that a single exposure doesn’t appear to harm the eye tissues. The journal adds that repeated exposure can trigger long-term changes in corneal sensitivity. Some people can subsequently experience intense headaches for several hours.

Studies also reveal that a commercial-grade pepper spray is listed between 2 million and 5.3 million Scoville units — a measure of “hotness” that hinges on capsaicin content. Compare that to between 200,000 and 350,000 Scoville units for habanero peppers, a variety of widely-used and one of the most painful peppers.

A document released by the National Institute of Justice, USA, however, said, “A number of arrestees exposed to OC, which induces coughing, gagging, and shortness of breath, have died in custody.

A recent study published in National Center for Biotechnology Information of US recently concluded that young age of a patient may lead to severe conjunctival proliferation as compared to a mainly uncomplicated course of pepper spray injuries in most adults. Two other studies from the same journal suggested that corneal abrasions and ulcers were not rare events when patients were exposed to pepper spray.

After Wednesday’s ruckus in the Parliament, Kamran Loghman, the inventor of modern pepper sprays, was quoted by a newspaper as saying, “Its (the pepper spray’s) use for anger is not justified — it is not for the purpose of controlling other people when you’re angry.”

How the spray works

When pepper is sprayed, the eyes clamp shut; if people manage to open them they most likely will not see anything because the capillaries in their eyes will be dilated, causing temporary blindness. There may also be an incontrollable fit of coughing which doubles the person over, bringing them down to their knees. This may be why most MPs, on Wednesday, were seen coughing, with their nose covered, when they came out of the Parliament after the incident.

Historically, chilli extract has been used for centuries. Japanese samurais used to throw rice-paper bags filled with pepper extracts at their enemies to cause temporary blindness. Chinese soldiers would heat up red peppers in oil, producing a smoke that was blown towards the enemy. In America, it was initially used by the FBI and US postal workers to temporarily incapacitate humans and animals. Towards the second half of the 1980s it became more widely used by law enforcement agencies throughout the country. In that same decade it also became available to the general public as a personal defence device.

In India, red chilli has traditionally been used for similar purpose. In the 1987 Hindi movie Mirch Masala, a group of women use chilli powder to bring down an amorous subedar  (a historical rank in the Indian Army) who pursues a woman. After the December 16, 2012 gang-rape incident in India, more and more people on the online platforms have been talking about its use and benefits.

What the law says

In the United Kingdom and many other European countries, pepper spray is classified as a weapon and nobody is allowed to use it without permission from the Home Secretary.

In the US, laws vary from state to state.

In India, it is legal to use it for self-defence and no licence is required. It is sold through state-approved companies.