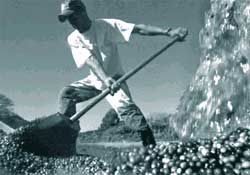 cancer risk among rural workers exposed to pesticides is almost twice as high as that for non-exposed workers, according to a Brazilian study published in the journal Environment International (July, Vol 31, No 5). Brazil is the world's seventh largest pesticide consumer.

Researchers Illona Maria de Brito S Stoppelli from the Centre of Water Resources and Applied Ecology, University of So Paulo, and Silvio Crestana from the Embrapa Instrumentaco Agropecuria in So Carlos, an organisation associated with the Brazilian Agricultural Research Corporation, gathered data on cancer among rural workers from the Amaral Carvalho Hospital, a regional referral unit for cancer. The hospital is located in the city of Ja in So Paulo state, where the use of pesticides is among the highest. In an evaluation of pesticide sales per economically active person in 1985, So Paulo topped the list with 32.2 kilogrammes of pesticides per person whereas in states such as Esprito Santo, it was just 1.9 kg.

The researchers took into account all rural workers treated at the hospital from 2000-2002. The data was arranged municipality-wise. It was found the maximum number of cancer cases -- 336 -- was reported from Bariri municipality, which was studied in detail. The result was considered high -- almost twice the normal cancer incidence in the area -- and it was felt the actual number could be even higher. This was because some workers may have been classified in the hospital database as housewives or retired residents, and so overlooked. People from Bariri who visited the hospital for diagnosis but were found not to have cancer were used as controls.

The researchers found cancers of the skin and digestive system were the most prevalent. Skin cancer accounted for 45 per cent of the cases and involved the face, eyelids, lips, neck and head. Though continuous exposure to ultraviolet radiation (from the sun) during work could be a major environmental trigger, the study stressed skin cancer could also be associated with pesticide exposure. Cancers of the digestive system represented 36 per cent of all cancer cases. This category included cancers of the oral cavity, pharynx, oesophagus, stomach, colon and rectum, as well as of digestive glands such as the pancreas.

Bariri municipality comprises 43,700 hectares. It mainly produces coffee, sugarcane, citrus fruit and corn and the use of herbicide 2,4- d and insecticide endosulfan is common. Data on the amount of pesticide used in the municipality was not available even though the authors approached all possible sources for this information. But according to people involved in agriculture, Bariri has a history of large-scale ddt and Benzenehexachloride use because of coffee cultivation. As many as 2,000 pesticides, containing 300 active ingredients, are in use in Brazil. The high pesticide consumption is the result of a government move during the 1960s and 1970s, under which farmers were given loans to modernise their production methods and to buy agrochemical products and machinery.

The Brazilian scientists also used satellite-based global positioning systems to map how some of the people studied (128 people including the controls) were distributed in the area. The objective was to find if there were areas where such cases were concentrated and, if so, to identify them. "The higher number of positive occurrences in the south western outskirts of the city indicated an area that must be prioritised in distributing environmental health information and conducting preventive education campaigns," say the authors.

The researchers also suggested several other measures to lessen the risk from pesticides. These included control of quality and sale of pesticides; simplifying product labels to make them easily understood; disseminating information on pesticides in schools, universities and rural communities; strategies to propagate risk information and adaptation of personal safety equipment to tropical temperatures.

Some scientists say that better methodology should be evolved to study links between exposure to pesticides and occurrence of cancer. According to Julia G Brody, executive director, Silent Spring Institute, usa, it is difficult to establish a link between the two because cancer takes a long time to develop but reliable methods for measuring lifetime exposure to chemicals are not available.