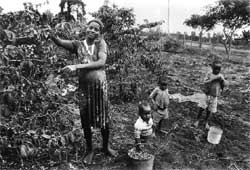 Despite their long history and their prominence in the local diet, potato yields of small Andean farmers are generally low. This is largely due to pest and disease-related losses. Intensified potato production, less reliance on local species and varieties, and the indiscriminate use of pesticides has resulted in a high incidence of pests and diseases. Early in 1997, Centre for Research and Information on Low-External-Input and Sustainable Agriculture ( ileia) programme in Peru began a ptd process among farmer groups in central and northern parts of the country. The majority of these groups identified potato pests as a major constraint in agricultural production. ileia employed several storage methods to reduce the incidence of these pests. Storing the potatoes in sand, barley straw, quinua chaff saw a gradual decrease in the number of these pest attacks.