Animal rights activists in India have been campaigning against  jallikattu, the traditional bull-taming sport of Tamil Nadu, for the past many years. Now, activists abroad are also supporting the campaign. On January 25, members of People For Ethical Treatment of Animals (PETA) staged protests outside the Indian Embassy in London, holding placards which read “Save India’s Reputation: End Jallikattu”, in Tamil, Hindi and English. The protesters called on the Indian government to enforce the national ban on the use of bulls as performing animals.

The Union Ministry of Environment  and Forests (MoEF) had issued a notification on July 11 last year expanding the scope of an earlier order that prohibits the exhibition and training of lions, tigers, bears, leopards and monkeys as performing animals to include bulls.  Despite the ban, the Madras High Court on January 11 permitted Tamil Nadu to continue with jallikattu, say protesters.

"The sport is a black mark on India’s reputation,” said Poorva Joshipura, PETA spokesperson, in a press statement.  "These events are illegal—they violate the ban on using bulls in entertainment and are completely against the spirit of India's animal-protection laws, which prohibit beating, kicking and torturing animals."

Jallikattu is organised every year in January during the harvest festival of Pongal. It’s mainly held in villages of Tamil Nadu’s southern districts of  Madurai, Sivagangai, Tiruchi, Pudukkottai, Karur and Salem. The most popular places where the sport is being conducted are Alanganallur, Tiruvapur, and Palamedu. There is a specific breed of cattle bred for this purpose. These cattle are reared in huge herds numbering in hundreds with a few cowherds tending to them. These bulls are ferocious and attacking.

In this violent  sport, bundles of money and other prizes are tied either to the neck strap or around the horns of the bull. The bull is released from a pen. As the raging bull comes out of the enclosure, one person rides on the hump of the bull and tries to tame it. The bull tries to shake the rider off. The person who manages to remain seated past the racing point wins the prize. Sometimes the bull is released in a barricaded open ground while people chasing it try to tame it. In another version, the bull is tied to a 15 metre rope and a team of seven to nine members try to tame it in 30 minutes. Jallikattu is so popular that it draws huge crowds every year even from outside the state.

The Indian chapter of PETA and a host of other animal rights groups  have been campaigning against the sport, taking the matter to court several times, stating that it violated the Prevention of Cruelty to Animals (PCA) Act of 1960. Despite the Supreme Court’s guidelines and enactment of the Tamil Nadu Regulation of Jallikattu Act in 2009, the blood and gore sport continues. For making the bulls more aggressive and wild, they are kicked, punched, force-fed alcohol, and chilly powder is rubbed into their eyes.

While animal rights groups and AWBI are fighting against jallikettu, the Tamil Nadu government wants the event to continue, respecting the sentiments of people, who view it as a traditional sport. The division bench of the Madras High Court which allowed jallikettu this year questioned the authority of the state government to take a stand in favour of jallikettu when the Centre has issued a notification prohibiting the use of bulls in public performances. 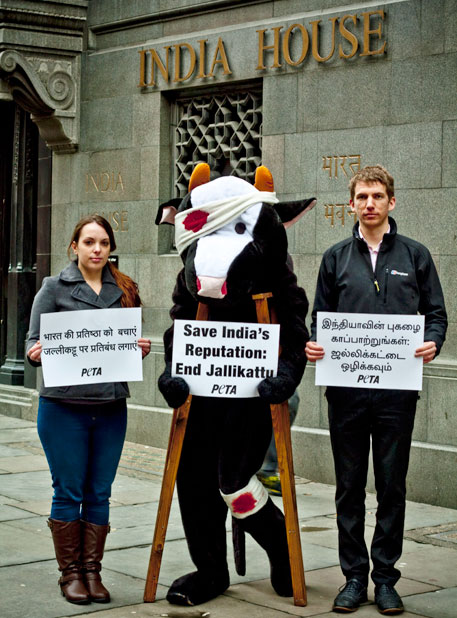 Passing interim orders on a batch of public interest petitions filed both in favour as well as against the event, including that of the AWBI, a division bench of the  Court directed that the events should be conducted strictly in compliance with a series of interim orders passed by the Supreme Court on the sport between January 2008 and March 2011, the safeguards provided under the Tamil Nadu legislation. “In all fairness, the state should see that the safety and security of bull tamers, spectators and bulls are protected. The festival is not only for us but also for the four-legged creatures. Take care and make it an enjoyable event. Ensure that everything goes well,” the court observed.

The case is going to be taken up again on January 30.

PETA has planned more protests outside Indian diplomatic mission in other countries. PETA’s protest in London came a day after Animal Rights Action Network (ARAN), a leading Irish group, announced plans to launch a Europe-wide campaign for a tourist boycott of India to protest against jallikettu.