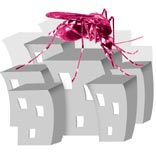 In late September, Richard Feachem of the Global Fund for aids, tb and Malaria (gfatm) visited India, only to be embroiled in a controversy when the media fell upon statements he made regarding India having overtaken South Africa as the world's no 1 country with hiv/aids cases. So, while the focus fell on aids, what went unnoticed was a malaria programme that Feachem kicked off.
Does Feachem know the disastrous state of previous malaria programmes? In 1997 the Enhanced Malaria Control Project (emcp) -- a five-year World Bank project worth Rs 891 crore (us $ 215 million) aiming to reduce malaria in 200 million people at risk, in 100 districts of seven states -- began. It was implemented by the National Anti-Malaria Programme (namp; re-christened nvbdcp, the National Vector Borne Disease Control Programme, in October 2003).
In November 2001, an unpublished mid-term review by the World Bank criticised namp for lack of application and massive underachievement. The project was to conclude in April 2003; it got two one-year extensions in the hope funds could be used up. A closed-door meeting of non-governmental organisations (ngos) was organised to expedite doling out bednets and chloroquine. emcp ends in June 2005.
This five-year us $286.5 million project offers little. It will fund bednets (like emcp) and a new drug regime that uses artemisinin combined therapy. Overall strategies remain the same: improve diagnostic surveillance and drug delivery, involve grassroots societies, ngos (three have been identified since a desperate call went out, in 2002, for ngo participation in emcp) and industry associations. Like emcp, gfatm fails to to address the cause of the disease: large infrastructure projects in remote areas.

Even their proposal is error-ridden. For instance, according to nvbdcp, the annual parasite index (indicates malaria prevalence in a population) has decreased from 11.2 in 1976 to 1.51 in 2003. But in the gfatm proposal, the same index for 2002 is mentioned as 4.60. This will be brought down to 3.2 by 2009. If this is true, then the incidence of the disease will be doubled, not reduced!
Why was the gfatm programme accepted so soon after emcp? The proposal was rejected earlier this year, but has been made more robust after discussions, assures Feachem. Feachem is hopeful, but there is little enterprise within namp. gfatm's monitoring and evaluation process will be more rigorous, it seems, but the same agencies that managed emcp will manage the programme.

Already, there are signs of facile duplication: how different is the surveillance and reporting under the gfatm programme to be from the recently cleared us $68 million World Bank funded Integrated Diseases Surveillance Programme (idsp)?

Surprising: according to the idsp document, emcp was a success; whereas the bank itself has criticised the programme and its implementation elsewhere! Will somebody please think of malaria, and controlling it?