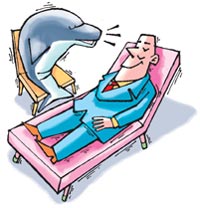 Feeling stressed out? Call up a dolphin. Improbable as it may sound, mobile phone users the world over will soon be able to dial up dolphins if a project undertaken at a sanctuary off the west coast of Ireland becomes a success. Apart from coming in handy as a stress-buster, the venture also aims to improve understanding of the cetacean and the ways in which it communicates.

The plan involves the use of underwater microphones to transmit sounds made by bottlenose dolphins that inhabit Shannon estuary to mobile phone users. It is being executed jointly by uk's mobile telecom company Vodaphone and scientists at the sanctuary. "In theory you could phone up and listen to dolphins while sitting in a traffic jam in Dublin," revealed Simon Berrow, a marine biologist at the Shannon Dolphin and Wildlife Foundation. But callers will be able to hear only a fraction of the sounds made by the dolphins, which use a wide frequency band.