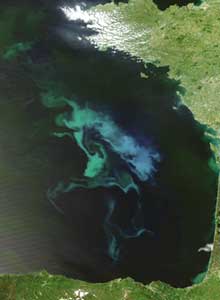 new research suggests that current estimates of phytoplankton growth in oceans and total carbon uptake, calculated through satellite imagery, might be overestimated. A new study, published online in Nature's website on August 31, 2006, has found large segments of the Pacific Ocean lack sufficient iron to trigger phytoplankton growth and the absence of this mineral induces microscopic ocean plants to produce additional pigments that make ocean productivity appear more robust than it actually is.

Past interpretations of satellite chlorophyll data may be inaccurate and the tropical Pacific Ocean may photosynthesise 1 to 2 billion tonnes less atmospheric carbon dioxide than what was previously thought. Global ocean carbon uptake is estimated at 50 billion tonnes, so the reduction could be about 2 to 4 per cent. When stressed by a lack of iron, phytoplankton create additional pigments that fluoresce or light up, according to the lead author, Michael J Behrenfeld, a research scientist in Oregon State University's Department of Botany and Plant Pathology. But satellite imagery is not equipped to distinguish that difference. The study is also important because it looks at the availability of iron throughout the tropical Pacific Ocean.

With their new findings, the scientists believe they now can use satellite imagery to identify specific areas that are iron-stressed and how they respond to changes such as the sudden influx of iron from a windstorm. The researchers are creating new models of carbon cycling. The role of the ocean in the global carbon cycle is critical. As phytoplankton plants grow, they suck carbon dioxide out of the atmosphere to build new cells. A better understanding of this carbon cycle is a key to studying global climate change as well.