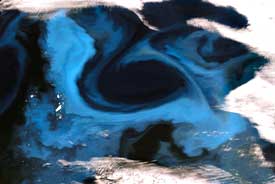 scientists hold phytoplankton responsible for the increase in cloud cover off the eastern coast of South America and say that this may have a bearing on climate. Researchers said that that airborne particles produced by oxidation of the chemical isoprene emitted by phytoplanktons, the microscopic floating oceanic plants, has doubled the cloud droplet concentration over a large area of ocean off the eastern coast of South America. Scientists predict that this increase of cloud cover could influence climate by reducing the absorption of sunlight. The study was published on November 2 in Science Express, the journal Science's website.

Athanasios Nenes of the Georgia Institute of Technology and Nicholas Meskhidze at the North Carolina State University used data from satellite observations to estimate the amount of chlorophyll in the ocean, the emission of isoprene and its connection with cloud formation.

Using complex numerical models, the scientists estimated that the increase in cloud cover reduced the absorption of sunlight by an amount comparable to what has been measured in highly polluted areas of the globe. This connection between clouds and biological activity could add a new component to global climate models, say scientists. "While looking at the satellite pictures, I noticed that cloud properties over large phytoplankton blooms were significantly different from those that occurred away from the blooms," says Meskhidze. "Studies like this one may help reshape the way we think about how the biosphere interacts with clouds and climate," says Nenes.

The researchers estimated that the isoprene emissions reduced energy absorption in the area by about 15 watts per square metre. "This is a huge signal," says Nenes. "You would normally expect to see a change of a couple of watts."

Besides, according to him, the Southern Ocean is ideal for study because it is largely untouched by pollution and has relatively steady temperature and meteorological conditions during the seasons in which phytoplankton blooms appear. This allowed them to see the impact of biology on clouds, he says.

The scientists will now examine other areas for similar activity. "There are a lot of areas that have intense biological activity. We will explore more regions to see if this is a widespread phenomenon. Chances are that we will see this in other places."