Pilferage-proof ration on the cards 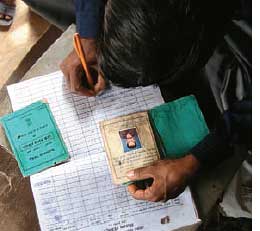 the Maharashtra government has decided to introduce biometric ration cards across the state to check corruption in the public distribution system (pds). Biometric cards will first be introduced in Mumbai and Pune in a year.

The government will soon sign a contract with Mumbai-based Spanco Telesystems for issuing over 22 million biometric ration cards and computerize the entire pds in Maharashtra, thus, making it transparent. "The new cards will have a barcode system and the photograph of the family head. Every card shall have a unique number. Computerization will help centralization of communication and updating of every transaction on the system, so that the chances of cheating during transactions can be minimized," said K P Bakshi, principal secretary, Department of Food, Civil Supplies and Consumer Protection.

Fake ration cards happen when members of the same family residing in different areas duplicate the cards (see 'Mumbai has 2.6 million fake ration cards', Down To Earth, January 15, 2008). This will not be possible in the new system because the data will be registered through the barcode number, which will remain the same even in case of two copies of a card. Officials will identify different users of the same card on the basis of the barcode number.

"The new system shall involve storage of details of the beneficiaries at the point-of-sale computers. Every transaction will be updated on the database so that it matches the already existing information in the event of next transaction. The transaction will happen only if biometrics details on the card and the database match," said Tushar Mohanty, senior vice-president, Spanco.

ngos welcome the new ration cards, but say there are other urgent issues that pds still has to address. Mumbai-based Rationing Kruti Samiti had suggested to the government introducing roaming ration cards for immigrant workers. Workers in the unorganized sector, tribals and the homeless who lack documentary proof of residence also need to be brought under the revamped pds.