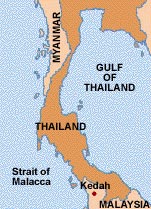 The Thai-Malaysian natural gas pipeline project is embroiled in a fierce controversy. While environmental activists object to the route of the project, the Thai government insists on going ahead with the us $710.7-million scheme by re-routing it. Experts warn that the programme could threaten the breeding cycle of 200,000 Javanese turtledoves, jeopardising the business of many communities.

The controversial 366-kilometre pipeline is slated to bring gas from the Gulf of Thailand onshore to southern Thailand, and on to Kedah state in northern Malaysia. The greens, meanwhile, feel that the project would cause enormous environmental damage to Thailand as well as Malaysia. They allege that no proper environmental impact study of the project has been conducted so far.