On October 13, Uzbek President Islam Karimov signed a decree that forbids naming towns, regions, villages, factories, streets or buildings after people or historical events. The decree requires that airports, train and bus stations, ports and other facilities must be named after the town, city or region where they are located. 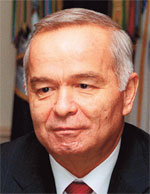 Karimov is known for his disapproval of naming places and facilities after people. In 1993 he had banned building monuments to living people. It was around the same time that large statues of then president Saparmurat Niyazov were being built in neighbouring Turkmenistan.

The October 13 decree makes an exception for certain people deemed to have made a significant contribution to the country’s history, such as Navoi city, named after the famous 15th-century Uzbek poet Nizam al-Din Alisher Navoi. Changing the names of geographical locations is permitted only when reverting to an earlier, historic toponym. For example, the decree allows to replace Soviet-era toponyms with earlier Uzbek ones.