The demand for universal public distribution system is justified, says Congress leader and former cabinet minister Mani Shankar Aiyar. He spoke to Jyotika Sood on what made him join the Right for Food Campaign at Jantar Mantar on November 29. Excerpts: 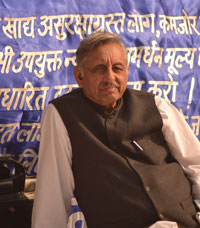 What do you think about the Right to Food Campaign?

The demand for the universal public distribution system (PDS) is absolutely correct. It is not true that only 15 to 20 per cent of Indian population needs food. If you go by the standards on food requirement, at least 80 per cent of population in India needs food security and universal PDS is an answer to it. The Right to Food Campaign as the cause will have an impact on millions of lives and I feel that National Food Security Act should surely address the demand of universal PDS.

Why do you support this Right to Food Campaign?

Can you see that man holding a placard stating 'Planning Commission should be closed' (pointing to a placard holding activist).  I agree and support his demand. Planning Commission is a big stumbling block on the road of progress for India. They come out with such unrealistic ideas, which the government is ready to implement without asking questions. Now be it Socio-Economic and Caste Census for PDS or Foreign Direct Investment in retail. The public outcry is being outrightly rejected, it seems.

There was a time when Prime Minister Manmohan Singh and Planning Commission deputy chairman Montek Singh Ahluwalia were in favour of closing this government establishment, and unfortunately now both are a part of it and supporting its demands.

The commission is neglecting democracy completely for its vision. In the 12th  Five-Year Plan approach paper, the Planning Commission says that Indian economy is growing at more than 8 per cent. But after six paragraphs they confess to the increasing poverty rate. In this 200 page document, the Planning Commission nowhere mentions how it wants to address the growing gap.

Right to Food Campaign activists say many poor people would be left out of the Below Poverty Line list after the ongoing Socio-Economic and Caste Census because of the faulty criteria adopted by the government. Your comments

The government needs to understand that families like mine which fall in the category of above the poverty line (APL) would not go to the government ration shops to buy food and would prefer to get it from the market. Instead of conducting a SECC survey to find beneficiaries for PDS, the government should leave it to the people to decide whether they want to avail it or not. Most APL families would exclude themselves and the state governments can remove them from their lists. This would be the best way to find the beneficiaries for PDS rather than government taking decision whom to give it to. The government should not draw a line for people who can access food under PDS.

How can it be done?

The government should prepare its package in such a way that they are targeted more towards poor. For example, more cereals like wheat and rice under PDS. It will help poor to come forward and will discourage people APL. The question is not of resources as there is no dearth of it. It’s the notorious and the corrupt civil supplies department which is responsible and does not allow the food to go to the beneficiaries. The delivery mechanism for PDS with the help of Panchayats can work better.

Can you explain how delivery mechanism for PDS can work with Panchayats?

There are 300,000 panchayats with 3.2 million panchayat representatives in India. Out of these, 1.2 million are women and 86,000 among them are holding office, which is a substantial number. Each village can run its own PDS with a grain bank. The work of panchayats could be monitored by gram sabhas and this will help to eliminate Food Civil Supply department that is one of the big reasons for wastage and leakages in PDS. Besides, with such a decentralised work, expenditure on PDS will also come down.

What do you think about cash transfer in PDS?

I’m not at all certain about whether it’s possible or or if it will work. As an economics student, I would like to tell you that the first lesson we learn in economics is that more money chasing scarce goods will reinforce inflation. So cash transfer is absolutely an absurd idea. Besides, you cannot replace cash with food, ever.