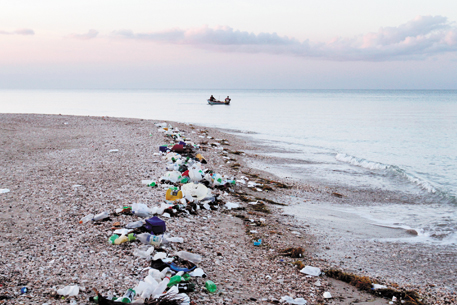 The ocean is the final receptacle of a substantial amount of waste generated on land. Plastic pollution in the ocean was first reported in the scientific literature of the early 1970s. In just four decades, it has become a pressing environmental problem and has been found even in the most remote corners of the earth. The amount of plastic entering the oceans is up to 2,000 times more than earlier estimates.

A study published in the February 13, 2015 issue of the journal, Science, estimated the amount of plastic that could enter the oceans based on the amount of unmanaged waste. The researchers found that anything between 4.8 and 12.7 million tonnes (MT) of plastic enters the oceans each year (see ‘More data collection needed’). 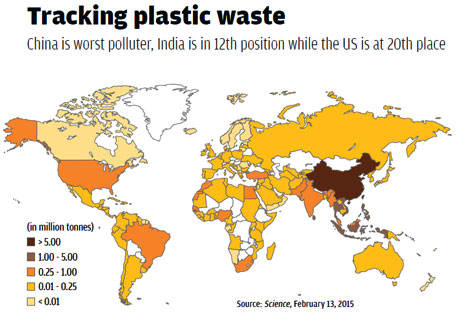 The findings are staggering, says Nick Mallos, director, Trash Free Sea programme of Ocean Conservancy, a US-based advocacy group. If things continue unchecked, in 10 years we could see one pound of plastic for every three pounds of finfish, adds Mallos. The concerns are justified considering that global plastic resin production is growing at a fast pace. It registered a 620 per cent increase between 1975 and 2012. Most of this plastic resin is used for packaging, is quickly disposed of and could end up in the sea. In December, 2014, a study published in PLoS ONE revealed that there are 5.25 trillion plastic particles floating around in the sea.

As it would be difficult and expensive to remove plastic from the sea, researchers suggest it would be better to start managing waste. They suggest reduction of waste, expanded recovery systems and extended producer responsibility. The researchers also suggest that while infrastructure is being built in developing nations, industrialised countries can take immediate action by reducing waste and curbing the growth of disposable plastic. If per capita waste generation were reduced to the 2010 average (1.7 kg/day) in the 91 coastal countries that exceed it, and the per cent plastic in the waste streams were capped at 11 per cent (the 192-country average in 2010), a 26 per cent decrease could be achieved by 2025. This strategy would target higher-income countries and might require smaller global investments.

The study underscores the need to shift the ocean conservation dialogue from beach cleanup to waste management to ultimately preventing plastics from entering our oceans. There is evidence that this waste is detrimental to ocean wildlife. “We know that plastic is bad for ocean wildlife and habitats-animals ingest it or can get entangled in it; it litters beaches and can degrade sensitive reef systems. In lab studies, we have seen that plastic has negative impacts on animals that ingest it, and scientists have seen plastic’s impact on more than 660 species of ocean wildlife, including every type of sea turtle, as well as the majority of other marine species like whales, dolphins, seals, and seabirds,” says Mallos. “As far as human health goes, we don’t yet know the full extent of how plastics affect the ocean food chain. However, each new study makes us more, not less concerned,” he adds.