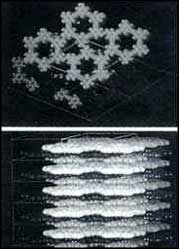 LINKING together individual molecules to make complicated structures, much in the same way as children playing with Lego, chemists are now trying to construct materials whose properties they can fix beforehand.

At least half a dozen groups in USA, Canada, Europe and Australia are assembling large arrays of molecules to form "designer solids" -- substances whose crystal structure is built to a predetermined plan (Science, Vol 260, No 5019).

Scientists have long known that the properties of a substance depend on the way its molecules are stacked together into large crystal structures. This determines, for instance, whether a substance can be used as a mirror, a semiconductor or an insulator.
By controlling key features of the molecular structure, such as the spacing between the molecules, the new breed of molecular architects can fine-tune properties of materials to achieve desired functions. Some exotic applications include smashing subatomic particles in a compact "molecular" particle accelerator or conducting electricity through wires made of molecules.

J Fraser Stoddart of the University of Birmingham in the UK is a pioneer in this burgeoning field. As his building blocks, he uses chemicals such as crown ether for rings, and benzene and related chemicals for rods. Using these, Stoddart and his colleagues have made several complex structures such as a molecular shuttle in which a loop of ether molecules threaded on a molecular rod is free to hop between two different sites. Stoddart's ultimate goal is to build a molecular computer in which molecular shuttles will act as switches, simulating computer chips.

Other groups are trying to use molecular networks to induce rare and difficult chemical reactions. Jeffrey Moore of the University of Michigan has built a kind of molecular scaffolding from chemical subunits called phenylacetlyenes. These are linked to form chains of various lengths, which can bend and twist like wires until their ends meet to form closed molecules. The scaffolding is fitted with different catalysts so that it can act like a chemical factory.

The world's most celebrated molecule -- the life-giving DNA -- is being used to construct new molecules by Nadrian Seeman, a chemist at the New York University. He is building three-dimensional lattices using DNA. The DNA molecule can be cut into different lengths and branching shapes. Moreover, it possesses the important property of self-assembly -- when two different strands are brought close together, they link up automatically.

By linking such strands together, Seeman was able to fabricate first a square and then a cube made of DNA. He is now working on joining multiple cubes into a lattice. Such a lattice, when ready, can be used to form unusual crystalline molecules.