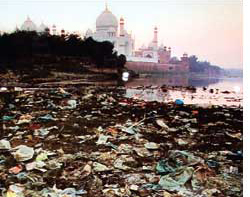 a landfill and compost plant proposed to come up near the Yamuna at Kuberpur village in Agra came in for criticism at a recent public hearing at Agra Collectorate. Environmentalists and social activists are concerned that incineration of waste at the plant will release toxic pollutants, dioxins and furans, in the environment.

At the public meeting on August 19, Hanjer Biotech Energies, which is executing the project, said rdf would be supplied to cement plants as a fuel supplement and not used for power generation. rdf use itself is being protested. "Incineration of rdf leads emits persistent organic pollutants like dioxins and heavy metals like mercury. Such technology is an invitation to public health disaster," said Gopal Krishna, convener of Delhi-based ngo Toxics Watch.

The eia report, mandatory for a project like this, was not made available at the meeting. Only an executive summary of eia was given to the people and that too in English. The summary brought to light faults like use of old data for estimating waste quantity, the site being just 200 m from the river, no mention of leachate collection and hydrogen sulphide monitoring. Hanjer Biotech Ener- gies' owner Irfan Furniturewala said the facility would not release discharge into the Yamuna. Agra's district magistrate was not present at the meeting.