Please all, blame all 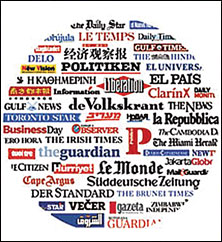 It seems like the publishing version of Steven Spielberg movie where alien invasion causes traditional adversaries to join together. On January 6, 56 newspapers, in Pakistan and India, in Israel and Lebanon, in Taiwan and China, in Greece and Turkey, in Africa and in North, South and Central America published an unprecedented joint editorial calling for meaningful action to face the threat posed by climate change.

The editorial blamed the rich world for most of the accumulated carbon in the atmosphere. But at another place it struck a tone very similar to the industrialized nation’s recent stand on solving climate change. “Developing countries can point out they did not cause the bulk of the problem, and also that the poorest regions of the world will be hardest hit.


But they will increasingly contribute to warming, and must thus pledge meaningful action of their own,” it noted.

The British paper The Guardian led the effort to bring the 56 newspapers which involved weeks of negotiations to reach a final version.

Even more noticeable was the almost total lack of support in the US: only the Miami Herald and one Spanish language paper, El Nuevo Herald, carried the editorial.