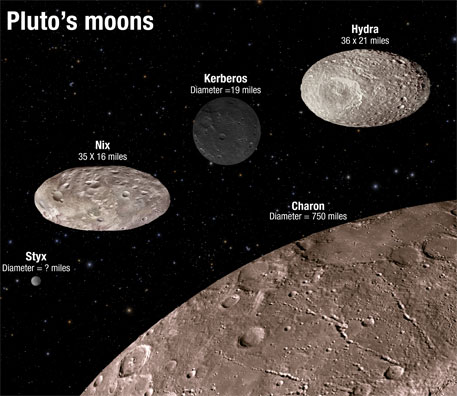 NASA’s Hubble telescope has found that Pluto’s moons, Nix and Hydra, wobble unpredictably. “If you lived on one of Pluto's moons, you might have a hard time determining when, or from which direction, the sun will rise each day,” read a report published by NASA on June 3.

The wobbling takes place because the moons are under the effect of a gravitational field that keeps shifting. This happens because of the double planet system of Pluto and Charon. Called a double planet because of their common center of gravity, which is located in the space between the two bodies, the changing gravitational field makes the moons tumble, says the report. The effect gets exaggerated because of the football-like, rather than spherical, shape of the moons that are just tens of kilometres in diameter.

It is suspected that Pluto’s other two moons, Kerberos and Styx, also undergo the same phenomenon. The data also showed that while Kerberos is dark as charcoal, the other moons are light-coloured.

The findings were published online in Nature on June 3.