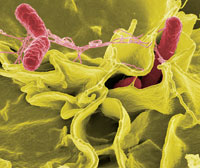 THE pathogenic bacterium Salmonella has a protective role too: it enhances the cancer-fighting ability of the body. Researchers from Italy and Russia tested the bacterium on melanoma, the deadliest form of skin cancer that has no effective treatment.

Their experiment was centred on the function of connexin 43 protein, that triggers an immune response leading to hunting down and killing of cancer cells. It forms small communication channels between different types of cells. Bits of the tumour proteins move through these channels and enter immune cells, called dendritic cells, which exhibit the tumour proteins on their surfaces much like red flags.

Immune system sentinels called cytokines, on sensing these red flags, trigger an attack against them. But as cancer cells grow and proliferate, expression of connexin 43 is down-regulated. The body does not produce enough connexin 43 to keep the cancer war going, the scientists noted in the August 18 issue of Science Translational Medicine.

“In combination with others, this therapy could improve survival,” commented tumour biologist Meenhard Herlyn of the Wistar Institute in Philadelphia in the US. “Medical companies have already shown interest in developing such vaccines,” said lead author Maria Rescigno of European Institute of Oncology in Italy. Her team is waiting for authorization to conduct clinical trials of the immunotherapy.