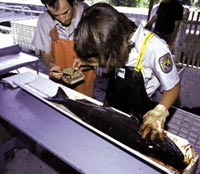 Reports of high mercury content in us waters have alarmed American Indians in Minnesota, among the biggest fish consumers. According to a recent report based on us Environmental Protection Agency data, 44 states, including Minnesota, have high levels of mercury in their waters. Earlier this year, the Minnesota Pollution Control Agency also said that around 1,900 lakes and streams in the state were "impaired". "It is a real issue and not something abstract for us," says Bob Shimek, an American Indian.Shimek says his people fish for their food and so are at a much graver risk of contamination than those who buy fish raised on farms. American Indians have been given the right to fish, but Shimek wonders: "What good is a treaty-reserved right if it's not safe?"