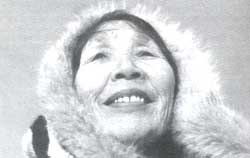 UP TO half of Inuit women in the Canadian Arctic are consuming toxic pollutants at levels that grossly exceed all international safety limitations. The seals, whales and fish they eat are contaminated with pesticides, heavy metals and PCBS - pollutants released almost half-a-world away by the developed, industrialised nations.

A huge study by scientists from the Norway-based Arctic Monitoring and Assessment Programme (AMAP) shows that 48 per cent of women on Baffin Island in northern Canada take in more of the pesticide chlordane than what the World Health Organisation considers "tolerable". The mercury limit is exceeded by 29 per cent and PCBS by 16 per cent. Chlordane and PCBS can damage the liver, reproductive, and the immune systems severely, even to the extent of causing cancer.

The study also shows that levels of chlordane in the breast milk of the Inuit women are 10 times higher than the milk of women in the south of Canada, while levels of PCBS are five times higher.

The 859-page report, presented at the first meeting of ministers from the eight-nation Arctic Council in the northern Canadian town of Iqaluit recently, backs up other studies in suggesting that pollutants passed on by women could damage their children's health.

Aqqaluk Lynge, president of the Inuit Circumpolar Conference, which represents the Inuit people throughout the Arctic, called on nations to curb their use of toxic pollutants. "That many Inuit women think twice about breast-feeding their babies due to the high level of pollutants in their milk is surely a wake-up call to the world," he said. The pollutants are carried to the north by prevailing winds and currents, and work their way into and up the food chain until they end up in larger fish and mammals. "Some Arctic indigenous peoples are among the most exposed populations in the world to certain contaminants, despite their remote location," says Peter Prokosch, coordinator of Worldwide Fund for Nature's Arctic programme.

Most of the pollutants come from Russia, which unlike other developed nations, has not signed the United Nations agreement aimed at cutting emissions of organic pollutants. Russian ministers in Iqaluit stressed the harsh economic conditions in the northern communities. The political crisis in Russia has stalled a major AMAP study to reduce PCB pollution. Although frustrated by the delay, AMAP's executive secretary Lars-Otto Reierson, insists that the study will go ahead.